Breaking News From Freeform’s TCA Presentation
BREAKING NEWS FROM FREEFORM’S TCA PRESENTATION
At today’s Television Critics Association Winter Press Tour, Freeform
showcased their continued commitment to inclusivity and authentic
storytelling with a panel titled “Freeform’s Youth Movement,” dedicated to
highlighting the power of young adult programming. “At Freeform, our shows
are uncompromising and bullish on what’s possible when young adults are
empowered to be themselves and share their voice about the things that
define them and their generation,” said Tom Ascheim, president, Freeform.
Below are several network announcements with additional news to break
during the panel.


JUNIOR YEAR IS ON—‘GROWN-ISH’ PICKED UP FOR SEASON 3
Avoiding a sophomore slump, critically acclaimed series “ grown-ish” has been picked up for a third season on
Freeform. Starring Yara Shahidi, Trevor Jackson, Francia Raisa, Emily
Arlook, Jordan Buhat, Chloe Bailey, Halle Bailey, Luka Sabbat and Deon
Cole; the series is a contemporary take on the issues that students face in
the world of higher education.
Currently airing its second season on WEDNESDAYS at 8 p.m. EDT/PDT on Freeform, the sophomore
year of “grown-ish” follows Zoey and her friends as they return to CalU
with confidence and swagger. Learning from the ups and downs of their
freshman year, they all think they’ve got their second year on lock, but
quickly realize that they’re not as grown as they think.
Freeform’s “grown-ish” is produced by ABC Signature Studios and executive
produced by Kenya Barris, Julie Bean, Jenifer Rice-Genzuk Henry, Craig
Doyle, Anthony Anderson, Laurence Fishburne, Helen Sugland and E. Brian
Dobbins.
Season to date, “grown-ish” ranks as the No. 1 comedy on cable among Women
18-49 and Females 12-34. “grown-ish” also ranks among this season’s Top 3
cable comedies with Women 18-34 (No. 2), Adults 18-34 (No. 3) and Persons
12-34 (No. 3). 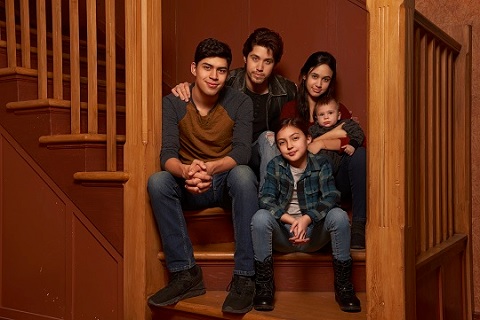 From Sony Pictures Television, the reboot will follow the five Acosta
children (fka Buendias) as they navigate daily life struggles to survive as
a family unit after their parents are suddenly deported back to Mexico. The
series stars Brandon Larracuente, Emily Tosta, Niko Guardado and Elle Paris
Legaspi. The new iteration of “Party of Five” is created by Keyser and
Lippman, who also serve as executive producers and writers. Rodrigo Garcia
also serves as executive producer and directed the pilot. Michal Zebede
serves as co-executive producer and writer.


FREEFORM RELEASES NEW KEY ART FOR SEASON TWO OF
‘MARVEL’S CLOAK & DAGGER’ AND ANNOUNCES TWO HOUR
SEASON PREMIERE
SET FOR APRIL 4
Critically acclaimed series “Marvel’s Cloak & Dagger”
is the story of Tandy Bowen (Olivia Holt) and Tyrone Johnson (Aubrey
Joseph)—two teenagers from very different backgrounds who find themselves
burdened and awakened to newly acquired superpowers, which are mysteriously
linked to one another. The only constants in their lives are danger and
each other. Tandy can emit light daggers and Tyrone has the ability to
control the power of darkness. They quickly learn they are better together
than apart. 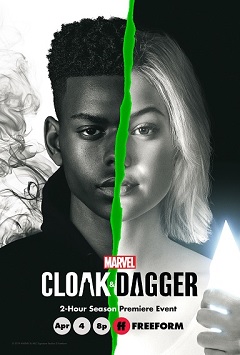 Premiering on THURSDAY, APRIL 4, at 8:00 pm EST/PST with a two-hour episode, season two
turns the heat up on our young heroes as Tyrone and Tandy try to find their
place as more active heroes in this world. As they learn and grow
emotionally, so will their skills. In season one, we saw Tandy and Ty dip
their toes into the world of hopes and fears; this season, they will dive
deeper into this metaphysical pool. With enhanced powers and a decision to
make about the type of heroes they want to be, they make the choice to run
into the danger, head first. They tackle a heartless vigilante and uncover
an evil that’s been preying on the young women of the city, as the show
takes on more serious topics like gang violence and human trafficking.
“Marvel’s Cloak & Dagger” stars Olivia Holt, Aubrey Joseph, Emma
Lahana, Gloria Reuben, Andrea Roth and J.D. Evermore. The series is
executive produced by showrunner Joe Pokaski (“Underground,” “Marvel’s
Daredevil”) and Marvel’s Head of Television Jeph Loeb (Marvel’s The
Punisher,” “Marvel’s Jessica Jones”). It is co-produced by Marvel
Television and ABC Signature Studios.


YOUR FAVORITE TRIO RETURNS FOR SEASON THREE OF ‘THE BOLD TYPE’
ON TUESDAY, APRIL 9 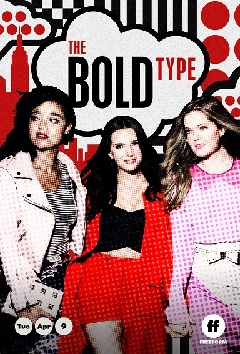 The latest headline from Scarlet Magazine—“The Bold Type”
returns for season three on TUESDAY, APRIL 9, at 8:00 p.m. EST/PST. Picking up right
after the heartbreak, romance and uncertainty from the season two finale in
Paris, “The Bold Type” is back in New York City where Jane, Kat and Sutton
are all dealing with the aftermath of some major decisions. Meanwhile,
Scarlet Magazine is undergoing some changes, with new staffers brought on
board who bound to ruffle some feathers.
Throughout season three, the trio will continue to push the boundaries of
what it means to be young women juggling careers and love lives while
embracing their identities. The series also continues to explore important
issues, both political and personal, such as workplace harassment, female
reproductive rights, data hacking and racial profiling, among others.
“The Bold Type” stars Katie Stevens, Aisha Dee, Meghann Fahy, Sam Page,
Matt Ward, Stephen Conrad Moore, Nikohl Boosheri and Melora Hardin as
Jacqueline Carlyle. Season three of “The Bold Type” is executive produced
by Amanda Lasher, Joanna Coles, Ruben Fleischer, David Bernad, Matt
McGuinness, Becky Hartman Edwards and Victor Nelli Jr. Holly Whidden serves
as co-executive producer. The series is a co-production between Freeform
and Universal Television.


FREEFORM CASTS JORDIN SPARKS, MATT SHIVELY AND BROOKS BRANTLY
FOR NEW SERIES, ‘BESTIES’ (WORKING TITLE)
Today, Freeform announced that Jordin Sparks (“Sparkle”), Matt Shively
(“The Real O’Neals”) and newcomer Brooks Brantly have been cast in the
highly anticipated new comedy series “Besties” (working
title). Sparks will play Becca; an ambitious overachiever from a
hard-working, conservative African-American family, who learns that her
birth mother is actually white. Shively will portray Matt, a former athlete
and current bar manager, who can’t completely let go of his glory days.
Brantly will portray Becca’s brother Todd, a mama’s boy who still lives in
their parent’s basement. Set in Los Angeles, the series will follow Becca
and her newly discovered half-sister Jesi, as they’re thrown into each
other’s lives by an online genetics test and have to figure out how to go
from strangers to sisters. Ranada Shepard, Casey Johnson and David Windsor
serve as creators and executive producers. Kenya Barris also serves as
executive producer. “Besties” is produced by ABC Signature Studios.


About Freeform
Part of Disney|ABC Television, Freeform connects to audiences and goes
beyond entertainment with bold, original programming and immersive social
engagement. As Disney’s young adult television and streaming network, it
delivers a unique mix of quality original and acquired series, plus
fan-favorite movies and the holiday events “31 Nights of Halloween,” “Kick
Off to Christmas” and “25 Days of Christmas.” The Freeform app is a service
that allows viewers with participating TV subscription services access to
24/7 live viewing of the network, as well as continued on-demand access via
a wide array of devices.

*COPYRIGHT ©2019 Disney Enterprises, Inc. All photography is copyrighted
material and is for editorial use only. Images are not to be archived,
altered, duplicated, resold, retransmitted or used for any other purposes
without written permission of Freeform. Images are distributed to the press
in order to publicize current programming. Any other usage must be
licensed. Photos posted for Web use must be at the low resolution of 72dpi,
no larger than 2×3 in size.

YouTube.com/FreeformNetwork
Posted by Danielle at 5:28 PM