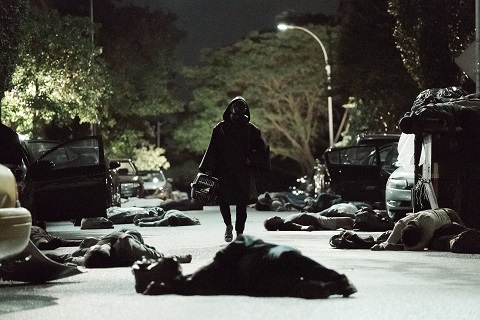 LOS ANGELES, February 4, 2019 - Y, the television adaption of the acclaimed post-apocalyptic science fiction comic book series Y: The Last Man, has been ordered to series at FX, it was announced today by Nick Grad and Eric Schrier, Presidents of Original Programming, FX Networks and FX Productions.

All of the men are dead. But one. Based on DC Comics' acclaimed series Y: The Last Man by Brian K. Vaughan and Pia Guerra, Y traverses a post-apocalyptic world in which a cataclysmic event has decimated every male save for one lone human. The new world order of women will explore gender, race, class and survival. Diane Lane stars in Y, leading an ensemble cast featuring Barry Keoghan, Imogen Poots, Lashana Lynch, Juliana Canfield with Marin Ireland and Amiber Tamblyn.
"Y: The Last Man is a towering achievement among graphic novel storytelling and it's been rewarding to work with this outstanding team," said Grad. "Michael Green and Aïda Mashaka Croal have partnered with Nina Jacobson and Brad Simpson to deliver a stunning new expression of this fascinating and timely story. Melina Matsoukas, who directed the pilot, did an incredible job bringing it to life with Diane Lane and this stellar cast."

"Brian and Pia's exploration of a world without men is a favorite for its depth, its humor, its insights and its monkey," said Croal and Green. "Adapted today it offers us a cracked mirror to look at our own very cracked world. We thank them for their trust - we thank FX for their support - and we thank the casting gods for letting us work with this incredible group of actors."

Jacobson and Simpson added, "Y is our favorite comic book series ever and we are thrilled to FINALLY bring it to the screen. We are grateful that Brian entrusted it to us and FX, and can't wait for the world to see Michael and Aïda's adaptation."

ABOUT FX
FX is the flagship general entertainment basic cable channel of FX Networks, a business unit of 21st Century Fox. Launched in June of 1994, FX is carried in 89 million homes. The diverse schedule features a growing roster of critically-acclaimed and award-winning hit dramas series including Taboo, Legion, Snowfall, Trust, Pose, Mayans M.C. and Mr Inbetween; the critically-acclaimed limited series American Horror Story, Fargo, American Crime Story, FEUD and the upcoming Devs, Fosse/Verdon, Shogun and Mrs. America; acclaimed hit comedy series including Atlanta, Baskets and Better Things, and the upcoming What We Do in the Shadows and Breeders; and the upcoming docuseries The Weekly with The New York Times. FX is the former home of the critically-acclaimed and award-winning hit drama series The Shield, Nip/Tuck, Rescue Me, Damages, Sons of Anarchy, Justified and The Americans. The network's library of acquired box-office hit movies is unmatched by any ad-supported television network.