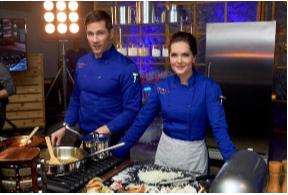 STUDIO CITY, CA – February 13, 2019 – Meghann Fahy (“The Bold Type,” “Deception,” Miss Sloane ) and Luke Macfarlane (“A Shoe Addict’s Christmas,” “Killjoys”) star in “Just Add Romance,” a new original movie premiering Saturday, March 2, (8 p.m. ET/PT), on Hallmark Channel.  Meeting in culinary school, Carly (Fahy) and Jason (Macfarlane) have instant chemistry, exchanged playful banter and competitiveness, while proving to be excellent chefs.  But one day, Jason doesn’t show up and it isn’t until three years later that they meet again as contestants on TV’s “Kitchen Showdown,” competing to win their own restaurant.  Clear from the first day of filming they aren’t just cooking up delicious dishes but also a sweet romance, Carly and Jason conquer every challenge, beating the other contestants and becoming the last two finalists.  Caught on film in heartfelt gazes and even a gentle kiss, the smitten chefs throw themselves into the final challenge while still supporting one another.  But when the losing contestants return to the final show as Carly and Jason’s sous chefs, emotions begin to boil over when everyone becomes invested in winning.  Told by one of her sous chefs that Jason is using truffles like she is, Carly thinks he’s deliberately switched dishes and is copying her.  With time running out to plate their meal for the judges, a lot more than Jason’s lobster ravioli and Carly’s shrimp risotto are at stake.  One of them could become a restaurateur, but if their relationship winds up on the chopping block, they both will lose.    “Just Add Romance” is a Winner Films Inc. production.  Sydell Albert and Howard Braunstein are the executive producers and Christian Bruyere serves as producer.  Terry Ingram directs from a screenplay by Karen Berger.
Posted by Danielle at 2:01 PM