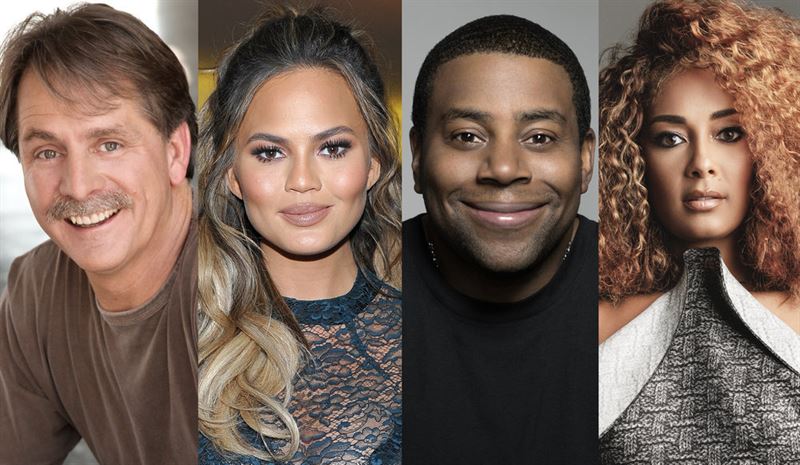 World’s Largest Comedy Festival, Just for Laughs, Teams with NBC and Universal Television Alternative Studio to Celebrate All Forms of Comedy and Catapult the Careers of the Hottest Up-and-Coming Performers

UNIVERSAL CITY, Calif. — Feb. 1, 2019 — NBC’s proud comedy legacy, which has opened doors for countless comedians, is ready to “Bring the Funny” with a new competition series for the next generation of comedy lovers. The series will feature the world’s best comedic acts and, for the first time on television, embrace every style of comedy performance in one competition.

The 10-episode series will bring together some of the most prolific comedians in the industry to serve as judges – “Saturday Night Live’s” longest-running cast member Kenan Thompson, cultural tastemaker Chrissy Teigen and comedy icon Jeff Foxworthy. Comedian Amanda Seales will serve as host for the competition.

In partnership with the international organization Just for Laughs, which has given rise to some of today’s most successful comedic acts via its iconic festivals, tours and television series, “Bring the Funny” will feature the best of the best stand-ups, sketch troupes and comedic variety acts. From solo comics to sketch troupes to musicians, magicians, podcasters, puppeteers, YouTubers and more — anyone who can make audiences laugh will have the chance to receive the career-changing $250,000 prize package and see their name in lights in the Bring the Funny showcase.

“Great comedians know how to make us laugh while serving as a reflection of the times, and we are excited to embrace and support the myriad of ways funny people bring us levity and humor today,” said Meredith Ahr, President, Alternative and Reality Group, NBC Entertainment. “Kenan, Chrissy, Jeff and Amanda are not only hilarious, but are pioneers in their respective arenas and understand what it takes to have longevity and breadth in this industry. They, along with our partners at Just for Laughs, will be an insightful resource for the talent that takes our stage.”

The series is looking for an incredibly diverse slate of acts across all ages and walks of life. For those interested in competing in “Bring the Funny,” please visit: www.bringthefunnycasting.com. Must be age 13 or older, eligibility requirement apply.
David Friedman and Matilda Zoltowski will executive produce. Just for Laughs President Bruce Hills serves as consulting producer. The series will be produced by Universal Television Alternative Studio.

KENAN THOMPSON BIO Kenan Thompson is currently in his 16th season on “Saturday Night Live,” making him the show’s longest-running cast member. Thompson has made numerous contributions to the show with his slew of hilarious impressions that include Rev. Al Sharpton, Charles Barkley, Steve Harvey and David Ortiz, and by playing memorable characters such as DJ Dynasty Handbag, the scathingly fierce co-host of “Deep House Dish,” boisterous second wife Virginiaca Hastings, and “Weekend Update” correspondent Jean K. Jean. In 2018, he received the Emmy Award for Outstanding Original Music and Lyrics for the “SNL” song “Come Back, Barack” and a nomination for Outstanding Supporting Actor in a Comedy Series. A native of Atlanta, Thompson made his television debut as a member of Nickelodeon’s all-kid sketch comedy series “All That.” He and his partner, Kel Mitchell, debuted on the spinoff “Kenan and Kel” in 1996. Thompson most recently showcased his voice talents as Bricklebaum in Illumination’s “The Grinch” which just made history as the #1 Christmas holiday movie of all time.

CHRISSY TEIGEN BIO TV personality and New York Times #1 bestselling author Chrissy Teigen is known for her clever, irreverent, yet savvy tweets and Instagram posts. In 2016, she released her #1 New York Times bestselling cookbook, “Cravings: Recipes for All the Food You Want to Eat.” In 2018, she released her highly anticipated second cookbook, “Cravings: Hungry for More,” in addition to launching her kitchen and tabletop collection, “Cravings by Chrissy Teigen,” which is available exclusively at Target. Teigen can also be seen on Paramount Network’s smash hit competition show, “Lip Sync Battle.”

JEFF FOXWORTHY BIO Jeff Foxworthy is one of the most respected and successful comedians in the country. He is the largest-selling comedy-recording artist in history, a multiple Grammy Award nominee, and bestselling author of more than 26 books. Widely known for his redneck jokes, his act goes well beyond that to explore the humor in everyday family interactions and human nature, a style that has been compared to Mark Twain. He has hosted and starred in a number of television shows and feature films. Foxworthy has his own comedy channel, “Jeff and Larry’s Comedy Roundup,” on SiriusXM, which showcases the best in great American comedy. His comedy special “We’ve Been Thinking” is currently available on Netflix and he recently released a game called “Relative Insanity,” which uses bits of his material for lots of game time fun. He also continues his live performances across the country.

AMANDA SEALES BIO Amanda Seales performs stand-up across the globe and tours colleges doing comedic lectures on everything from sexism, diversity, relationships and black popular culture. Seales, who is a former MTV VJ and has master’s in African-American studies from Columbia University, headlined and served as executive producer on the second-ever stand-up comedy TV special for HBO from a black woman, “I Be Knowin’” and is a series regular on HBO’s “Insecure.” Seales also guest-starred on “Blackish,” performed stand up on “Late Night with Seth Meyers” and opened for Chris Rock. She is the creator/host of the hit comedy game show “Smart Funny & Black,” and speaks truth to change via her wildly popular Instagram and weekly podcast, and soon to be book, “Small Doses.” Additionally she has written, produced and starred in two seasons of her scripted comedy, “Get Your Life,” which went viral.

ABOUT JUST FOR LAUGHS
Just for Laughs Television is one of the leading producers of stand-up and variety programming and has produced television programs that have been seen around the world on ABC, HBO, Netflix, Amazon, MTV, TBS, CBC, BBC1, Showtime, TEN Australia and the Comedy Network. The company has also expanded into scripted and non-variety programming. Just for Laughs Television is part of the Just for Laughs Group. Founded in 1983, the Just for Laughs’ growth is concentrated on three major focal points: festivals (in Montreal, Toronto, Vancouver and Sydney), television production and stand-up specials (most notably “Gags,” seen in 135 countries and on 100 airlines) and live shows (Canadian tour dates for Jerry Seinfeld, Carol Burnett, Bill Burr, Jimmy Carr, Kathy Griffin, Trevor Noah and Steve Martin & Martin Short). The Montreal Just for Laughs Festival, which will celebrate its 37th edition in July, is the world’s largest and most prestigious comedy event, welcoming more than 2 million people each summer.

ABOUT UNIVERSAL TELEVISION ALTERNATIVE STUDIO Universal Television Alternative Studio is a leading supplier of hit unscripted content and alternative formats, and creates, develops and produces a diverse slate of original series domestically and internationally. The studio’s most recent breakout hit includes NBC’s athletic competition show “The Titan Games,” starring and executive produced by Dwayne Johnson. Additionally, the studio is responsible for “Making It,” from executive producers Amy Poehler and Nick Offerman, and the #1 new series of 2017, “World of Dance,” starring and executive produced by Jennifer Lopez, which has been remade in Poland, Philippines and Thailand. The high-stakes game show “The Wall,” which has been sold into 27 territories internationally, has become the highest-rated game show in multiple territories around the world. Hosted by multiple Emmy Award winner Jane Lynch, “Hollywood Game Night” has been remade across 21 territories and recently completed production on its sixth season. The studio debuted “In Search Of” with Zachary Quinto for History. Upcoming series include the songwriting competition “Songland,” from executive producers Adam Levine, Dave Stewart and Audrey Morrisey. Universal Television Alternative Studio is a division of NBCUniversal.
Posted by Danielle at 2:09 PM