Oscar-Nominated PERIOD. END OF SENTENCE. on Netflix on Feb. 12

NETFLIX LAUNCHES OSCAR®-NOMINATED DOC SHORT
PERIOD. END OF SENTENCE.
ON FEBRUARY 12TH
Springing From Young Feminist Activism, Rayka Zehtabchi’s Film – Which
Combats the Stigma of Menstruation – Is The Brainchild of a
Los Angeles Teacher and Her Former Students 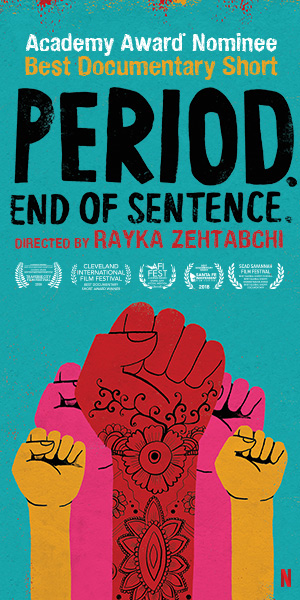 PERIOD. END OF SENTENCE. came to life at the Oakwood School in North Hollywood, California.  It is the brainchild of high school English teacher Melissa Berton, and several of her former high school students, including six who serve as executive producers. They came up with the idea when they realized that many of the girls in their partner school in India would leave school and stop their education once they began to menstruate, because they did not have access to sanitary pads.  Seeking to raise awareness of this issue, the students made the documentary and formed the nonprofit, The Pad Project (www.thepadproject.org/), with the idea that a period should end a sentence, not an education.  A two-pronged effort, The Pad Project works both to supply sanitary pad machines to women and girls in poverty-ridden villages around the world and shatter the stigma surrounding menstruation everywhere.

Following a trip to the United Nations, where the high school students served as delegates to the Commission on the Status of Women, they started fundraising through bake sales, yoga-thons, and two successful Kickstarter campaigns in order to finance the machine and its supplies.  Over the course of five years, after having graduated high school and gone off to college, the students were able to hire director Rayka Zehtabchi, a 2016 USC film school graduate and a young woman only a few years older than them, and make the film.  Berton and a group of her students accompanied Zehtabchi to India to shoot it, with post being completed in Los Angeles.

The documentary short double-qualified for the Academy Awards in 2018, winning jury and audience awards at Michael Moore’s Traverse City Film Festival and Cleveland International Film Festival.  The film also took home jury and audience awards from AFI FEST, among other festivals, and is now nominated in the Documentary Short category of the 91st Academy Awards®.  The film continues to inspire students to realize their power in thinking globally and recognize the impact young women can create.
https://www.netflix.com/periodendofsentence