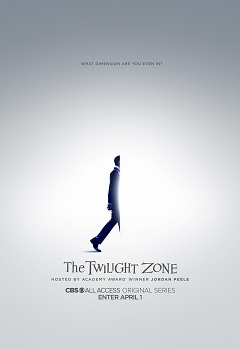 Feb. 21, 2019 - CBS All Access today revealed the official trailer and key art for its highly anticipated new original series THE TWILIGHT ZONE, which will premiere with two episodes on Monday, April 1. Following the series premiere, all subsequent episodes will be released on Thursdays beginning April 11, exclusively for CBS All Access subscribers.

The original "The Twilight Zone" premiered on Oct. 2, 1959 on CBS. The series took viewers to another dimension, a dimension not only of sight and sound, but of mind. "The Twilight Zone" became a worldwide phenomenon as it used socially conscious storytelling to explore the human condition and culture of the times. It was a journey into a wondrous land of imagination for five years on CBS, from 1959 to 1964. The godfather of sci-fi series, the show explored humanity's hopes, despairs, prides and prejudices in metaphoric ways conventional dramas could not. Every episode of the original series is available to stream now on CBS All Access.

About CBS All Access:
CBS All Access is CBS' direct-to-consumer digital subscription video on-demand and live streaming service. CBS All Access gives subscribers the ability to watch more than 10,000 episodes on demand - spanning exclusive original series, CBS Television Network's primetime, daytime and late-night shows, plus classic TV hits - as well as the ability to stream local CBS stations live across the U.S. CBS All Access' original series include THE GOOD FIGHT, STRANGE ANGEL, TELL ME A STORY and NO ACTIVITY, as well as the upcoming reimagining of THE TWILIGHT ZONE, INTERROGATION, and WHY WOMEN KILL. CBS All Access is also the exclusive domestic home to STAR TREK: DISCOVERY, STAR TREK: LOWER DECKS and a new untitled "Star Trek" series featuring Sir Patrick Stewart. CBS All Access also includes the ability to stream CBS Interactive's other live channels, CBSN for 24/7 news, CBS Sports HQ for sports news and analysis, and ET Live for entertainment coverage.

The service is currently available online at CBS.com, on mobile devices via the CBS app for iOS, Android and Windows 10, and on Roku Players, Apple TV, Chromecast, Android TV, Xbox One, PlayStation 4, Fire TV, Samsung Smart TVs, Vizio Smartcast TVs and Amazon Channels. Versions of CBS All Access have now launched internationally in Canada and Australia (10 All Access), with unique but similar content and pricing plans. For more details on CBS All Access, please visit https://www.cbs.com/all-access.