WANT TO BE SINGLE BY VALENTINE’S DAY? 💔 | Watch the new trailer for THE BREAKER UPPERERS starring Jackie Van Beek and Madeleine Sami 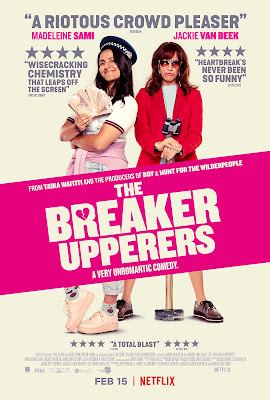 Written and Directed by | Jackie Van Beek and Madeleine Sami
Produced by | Carthew Neal, Ainsley Gardiner, and Georgina Conder
Starring | Jackie Van Beek and Madeleine Sami
Synopsis: Fifteen years ago, Mel (Madeleine Sami) and Jen (Jackie van Beek) discovered they were being two-timed by the same man. Bitter and cynical they became fast friends and formed The Breaker Upperers, a small-time business breaking up couples for cash.  Now they’re in their late-thirties and business is booming. They’re a platonic, codependent couple who keep their cynicism alive by not getting emotionally involved with anybody else. But when they run into an old victim, Mel develops a conscience and their friendship is truly put to the test.
Available on Netflix starting February 15!
Visit Netflix.com/thebreakerupperers
Posted by Danielle at 2:55 PM

Email ThisBlogThis!Share to TwitterShare to FacebookShare to Pinterest
Labels: Netflix, The Breaker Upperers