JESSICA LOWNDES AND WES BROWN STAR IN ‘OVER THE MOON IN LOVE’ PREMIERING SEPTEMBER 21, ON HALLMARK CHANNEL

JESSICA LOWNDES AND WES BROWN STAR IN ‘OVER THE MOON IN LOVE’ PREMIERING SEPTEMBER 21, ON HALLMARK CHANNEL 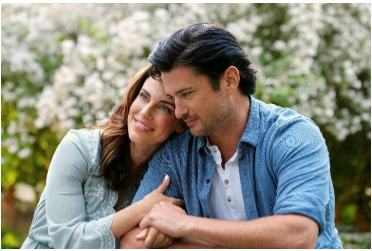 High school friends, cute Brooklyn (Lowndes) and nerdy Devin (Brown) are plutonic yet connected by romance.  She can instinctively pair classmates into lasting relationships but can’t find love herself.  He can write love songs but can’t complete one particular ballad, believing the missing lyrics can only be found with true love.  Flashforward 12 years, and Brooklyn is a professional matchmaker with her own business, Over the Moon in Love, while Devin is a singersongwriter, playing weddings and musical gigs.  Both have remained single and while Brooklyn is still a beauty, Devin has turned into a handsome hunk.  Instantly reconnecting over burgers at their favorite food truck, the two certainly have chemistry.  While it’s clear Devin longs to turn their friendship into romance, Brooklyn is focused on landing the cover of Life/Style by finding the magazine’s attractive lead writer a love match.  Putting her 100% success rate on the line, Brooklyn asks Devin to take the woman out and from the get-go it’s obvious they have nothing in common.  Determined to make the match work, Brooklyn feeds the woman lines that will surely capture Devin’s heart, and it works!  Too bad Brooklyn has suddenly realized Devin is her true love.  Blurting out that the match she created is a sham, Brooklyn now risks losing the magazine cover, and more importantly Devin, the man she’s been over-the-moon-in-love with all along.

“Over the Moon in Love” is from Johnson Production Group.  The executive producers are Timothy O. Johnson, Jessica Lowndes and Michael Vickerman.  Supervising producer is Oliver De Caigny.  Navid Soofi serves as producer.  Christie Will Wolf directed from a screenplay by Jessica Lowndes.
Posted by Danielle at 1:57 PM

Email ThisBlogThis!Share to TwitterShare to FacebookShare to Pinterest
Labels: Hallmark Channel, movie, Over the Moon in Love