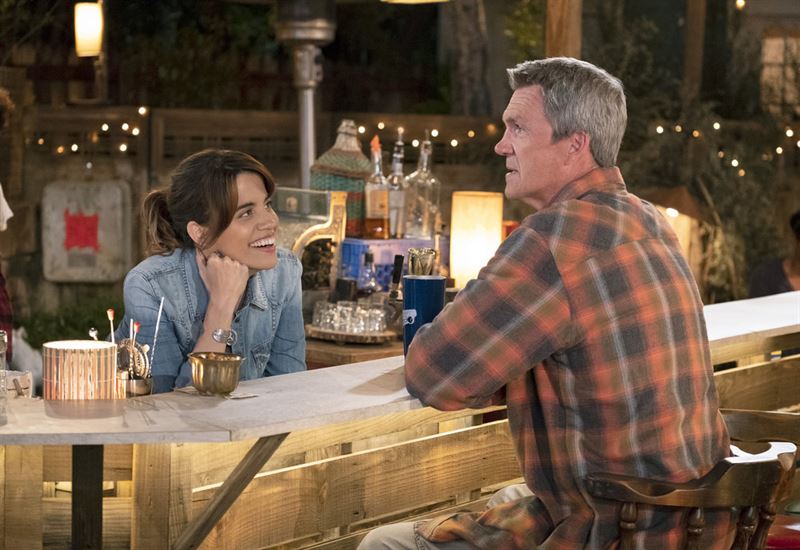 ABOUT “ABBY’S”
This unlicensed, makeshift establishment in Abby’s backyard is the perfect gathering place for locals to find camaraderie and sanctuary. To maintain the perfect bar ecosystem, all patrons must abide by a specific set of rules. This includes no cell phones (not even to look something up), understanding that earning a seat at the bar takes time to rise through the hierarchy and knowing that losing a challenge may have some unpleasant and unpalatable drink-related repercussions.

As bar owner, Abby (Natalie Morales, “Parks and Recreation,” “The Grinder,” “Trophy Wife”) has found her true calling, hosting friends and newcomers alike. No nonsense, Abby is ex-military, having served two tours as a Staff Sergeant in the Marines. Her world is shaken when new landlord Bill (Nelson Franklin, “Black-ish,” “Veep,” “New Girl”), who recently inherited the house from his deceased aunt, unexpectedly shows up citing all kinds of reasons why the whole venture is illegal. Newly divorced, he is a cautious worrier and definite non-risk-taker who eventually warms to the place and agrees to let the bar remain open, provided Abby makes some changes.

The cast of regulars also includes Fred (Neil Flynn, “The Middle,” “Scrubs”), a fixture at the bar who is grateful for a place to enjoy a beer and conversation – and refuses to allow some bureaucratic busybody to disrupt his perfect refuge; Beth (Jessica Chaffin, “Big Mouth,” “Search Party,” “Pitch Perfect 3”), a harried mom living next door who can escape the madness of her home life while still keeping an eye on things from her perch atop a bar stool; Rosie (Kimia Behpoornia, “Unicorn Store,” “Pop Rox”), the bar manager who prides herself on having memorized all 162 rules and regulations; and James (Leonard Ouzts, “Set It Up,” “Master of None”), the gentle scaredy-cat of a bouncer who crumbles in the face of confrontation.
Posted by Danielle at 2:26 PM