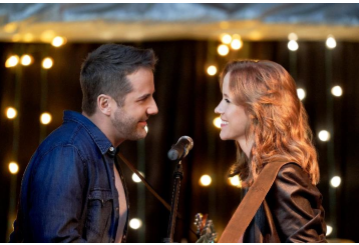 STUDIO CITY, CA – September 9, 2019 – Jessy Schram (“Falling Skies”), Niall Matter (“Eureka”) and Lucas Bryant (“Haven”) star in “Country at Heart,” a new, original movie premiering Saturday, October 5 (9 p.m. ET/PT), on Hallmark Channel as part of the network’s annual “Fall Harvest” programming event.    Struggling Nashville singer/songwriter Shayna Cook (Schram) is on the verge of giving up on her career and returns to her small-town home of Silverado just as their local music festival is about to kick off, when a chance encounter with prolific songwriter Grady Connor (Matter) changes everything.  He’s trying to write a song for country music star Duke Sterling (Bryant) and Shayna seems like the perfect writing partner.  Shayna and Grady grow close and romance blooms as they work on their love song but when she meets Duke, he begins to see her star potential and asks her to be his opening act at the upcoming festival.  Although this seems like the opportunity of a lifetime for Shayna, the contentious history between Duke and Grady threatens to undermine everything she and Grady created.  As her big break at the music festival approaches, Shayna feels forced to choose between love and possible stardom.   Featured in the movie are musical performances by each of the three lead actors, including the original songs “Big Deal,” “A Life in a Love,” and “Right in Front of You,” all written specifically for the movie.  “Country at Heart” is produced by HP Country Heart Productions, Inc.  Brad Krevoy, Eric Jarboe, Amanda Phillips Atkins, Micheline Blais, Lincoln Lageson and Stephen White serve as executive producers.  David Anselmo is the producer.  Bradley Walsh directed from a script by Brigit Stacey, based on a story by Steve White.
Posted by Danielle at 5:04 PM