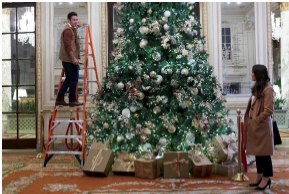 STUDIO CITY, CA – October 16, 2019 — Elizabeth Henstridge (“Agents of S.H.I.E.L.D.,” “Wolves at the Door”), Ryan Paevey (“A Summer Romance,” “General Hospital”), Bruce Davison (“The Gift of Christmas,” “The Fosters”) and Julia Duffy (“The Cool Kids,” “Shameless”) star in “Christmas at The Plaza,” a new, original movie premiering Thursday, November 28 (8 p.m. ET/PT), on Hallmark Channel as part of the network’s beloved, #1-rated programming event, “Countdown to Christmas,” celebrating its 10th anniversary.  Hallmark Channel is historically the #1 television network in all of Q4.  During the holiday season in New York, Jessica (Henstridge), an archival historian enmeshed in a declining romantic relationship, is commissioned to create an exhibition honoring the history of Christmas at The Plaza Hotel.  There, she meets Nick (Paevey), a handsome decorator hired to deck out the iconic landmark for Christmas.  When The Plaza’s manager, Amanda (Duffy), pairs them together, Jessica and Nick go to work, preparing the exhibition with a little help from the hotel’s charming bellman, Reginald (Davison).  Before long, as they find themselves enjoying a host of holiday traditions, Jessica and Nick also find themselves falling for each other.  With Christmas rapidly approaching — and unexpected challenges surrounding the holiday exhibit arising — tensions mount as Jessica must figure out her romantic priorities and decide with whom she’ll ultimately spend Christmas at The Plaza. “Christmas at The Plaza” is from Crown Media Productions, LLC.  Karen Spiegel is the executive producer.  Ian Dimerman serves as producer.  Ron Oliver directed from a script he wrote.
Posted by Danielle at 2:00 PM