ABC Unveils 2019-2020 Prime-Time Schedule
Only three new scripted series will debut in the fall - dramas "Emergence" and "Stumptown"; and the "black-ish" comedy spinoff "mixed-ish." [via press release from ABC] ABC UNVEILS 2019-2020 PRIME-TIME SCHEDULE
Strength and Consistency Key to Fall Lineup, With Only Three New Scripted Series Added - 'Emergence,' 'mixed-ish' and 'Stumptown'
Most Stable Schedule in Over a Decade
In the Great Tradition of ABC, All New Series Have Broadly Appealing Concepts With Strong Female Points of View
New Dramas 'The Baker and the Beauty,' 'For Life' and New Comedy 'United We Fall' Set for Midseason 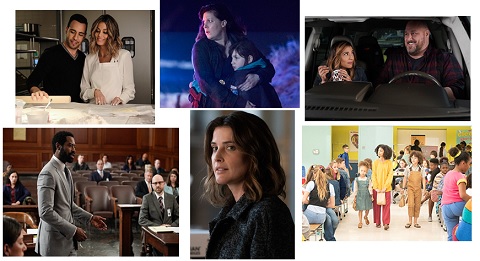 Clockwise from top left: "The Baker and the Beauty" (ABC/Guy D'Alema); "Emergence" (ABC Studios/Virginia Sherwood); "United We Fall" (ABC/Christopher Willard); "mixed-ish"
(ABC/Kelsey McNeal); "Stumptown" (ABC/David Bukach); and "For Life" (ABC/Giovanni Rufino)
In her inaugural upfront presentation as president of ABC Entertainment, Karey Burke will unveil a slate of programming for the 2019-2020 season that is bolstered by the strength of established, fan-favorite shows and captivating new programs energized by bold characters and storytelling. Burke will present her plan to the advertising and media communities this afternoon as part of the first Disney Upfront Experience, which brings together the networks of Walt Disney Television and ESPN at Lincoln Center's David Geffen Hall and Alice Tully Hall in New York City.

"Since the beginning of the year, ABC has been the No. 1 network with a schedule that is working, and we are going to nurture it," said Burke. "Going into next season, our priorities are stability and launching shows in a way our audience will know we are committed to them. Add to that some of the most buzzed-about titles and top talent of the recent pilot season, and we have an enviable combination that sets the stage for us to win with women and grow our overall reach."

Only three new scripted series will debut in the fall - dramas "Emergence" and "Stumptown"; and the "black-ish" comedy spinoff "mixed-ish" - a remarkably fewer number, thanks to the consistent viewership that many of ABC's current shows continue to offer. In the current season, ABC claims six of the Top 20 broadcast entertainment shows, including two of the top four dramas - "Grey's Anatomy" and "The Good Doctor" - and the No. 1 new comedy, "The Conners" - all of which will return in the fall.

"A Million Little Things," which grew viewership following its move to Thursday nights and ranks No. 17 among the Top 20, will also return in the fall, along with the highly anticipated 11th and final season of one of TV's most celebrated comedies, "Modern Family," which rounds out ABC's entries on the Top 20 list at No. 19.

Additionally, fan favorites "America's Funniest Home Videos," "American Housewife," "American Idol," "The Bachelor," "black-ish," "Bless This Mess," "Dancing with the Stars," "Fresh Off the Boat," "The Goldbergs," "How to Get Away with Murder," "Marvel's Agents of S.H.I.E.L.D.," "The Rookie," "Schooled," "Shark Tank," "Single Parents" and "Station 19" will return next season, as previously announced.

New dramas "The Baker and the Beauty" and "For Life," along with the new comedy, "United We Fall," will debut midseason.

Fall premiere dates will be announced at a later time. Please note that shows picked up to series but not listed on the schedule below will debut later in the 2019-2020 season.

ABC's fall prime-time schedule is as follows (all times listed are Eastern/Pacific). New shows are in bold.

NEW FALL AND MIDSEASON SERIES
DRAMAS
THE BAKER AND THE BEAUTY
Daniel Garcia is working in the family bakery and doing everything that his loving Cuban parents and siblings expect him to do. But on a wild Miami night he meets Noa Hamilton, an international superstar and fashion mogul, and his life moves into the spotlight. Will this unlikely couple upend their lives to be together and pull their families into a culture clash?
Dean Georgaris writes and executive produces with Becky Hartman Edwards and director David Frankel. In addition, Keshet's Avi Nir, Alon Shtruzman, Peter Traugott and Rachel Kaplan are executive producers, along with Assi Azar. Based on a hit Israeli show created by Assi Azar originally for Keshet Broadcasting, the series is produced by Universal Television and ABC Studios in association with Keshet Studios. ABC Studios is a part of Disney Television Studios, a collection of studios comprised of 20th Century Fox Television, ABC Studios and Fox 21 Television Studios.
Cast: Victor Rasuk as Daniel, Nathalie Kelley as Noa Hamilton, Carlos Gómez as Rafael Garcia, Dan Bucatinsky as Lewis, Lisa Vidal as Mari Garcia, David Del Rio as Mateo Garcia, Belissa Escobedo as Natalie and Michelle Veintimilla as Vanessa.
Follow "The Baker and the Beauty" (#TBATB) on Instagram, Twitter and Facebook.

EMERGENCE
A character-driven genre thriller, "Emergence" is about a police chief who takes in a young child she finds near the site of a mysterious accident who has no memory of what has happened. The investigation draws her into a conspiracy larger than she ever imagined, and the child's identity is at the center of it all.
Written and executive produced by Michele Fazekas & Tara Butters, Paul McGuigan directs the pilot and is an executive producer. "Emergence" is produced by ABC Studios. ABC Studios is a part of Disney Television Studios, a collection of studios comprised of 20th Century Fox Television, ABC Studios and Fox 21 Television Studios.
Cast: Allison Tolman as Jo, Alexa Swinton as Piper, Owain Yeoman as Benny, Ashley Aufderheide as Bree, Robert Bailey Jr. as Officer Chris, Zabryna Guevara as Abby with Donald Faison as Alex and Clancy Brown as Ed.
Follow @EmergenceABC (#Emergence) on Instagram, Twitter and Facebook.

FOR LIFE
Inspired by the life of Isaac Wright Jr., "For Life" is a fictional serialized legal and family drama about a prisoner who becomes a lawyer, litigating cases for other inmates while fighting to overturn his own life sentence for a crime he didn't commit. His quest for freedom is driven by his desperate desire to get back to the family he loves and reclaim the life that was stolen from him. The show will also, through the window of his ferocious struggle and his complicated relationship with a progressive female prison warden, examine the flaws and challenges in our penal and legal systems.
From Hank Steinberg, Curtis "50 Cent" Jackson via G-Unit Film & Television, Doug Robinson and Alison Greenspan of Doug Robinson Productions and Isaac Wright Jr. The pilot is directed and executive produced by George Tillman Jr. ("The Hate U Give"). "For Life" is a co-production of Sony Pictures Television Inc. and ABC Studios. ABC Studios is a part of Disney Television Studios, a collection of studios comprised of 20th Century Fox Television, ABC Studios and Fox 21 Television Studios.
Cast: Nicholas Pinnock as Aaron, Indira Varma as Safiya, Joy Bryant as Marie, Glenn Fleshler as Frank, Dorian Missick as Jamal, Tyla Harris as Jasmine with Mary Stuart Masterson as Anya and Boris McGiver as DA Maskins.
Follow @ForLifeABC (#Forlife) on Instagram, Twitter and Facebook.

STUMPTOWN
Based on the "Stumptown" graphic novel series, "Stumptown" follows Dex Parios (Cobie Smulders) - a strong, assertive and sharp-witted army veteran with a complicated love life, gambling debt and a brother to take care of in Portland, Oregon. Her military intelligence skills make her a great PI, but her unapologetic style puts her in the firing line of hardcore criminals and not quite in alliance with the police.
Writer Jason Richman produces the series with Ruben Fleischer and David Bernad (The District), Greg Rucka (author of the "Stumptown" graphic novel series), Matthew Southworth, and Justin Greenwood (illustrators of the "Stumptown" graphic novel series).
James Griffiths is an executive producer and directed the pilot. The series is produced by ABC Studios. ABC Studios is a part of Disney Television Studios, a collection of studios comprised of 20th Century Fox Television, ABC Studios and Fox 21 Television Studios.
Cast: Cobie Smulders as Dex Parios, Tantoo Cardinal as Sue Lynn Blackbird, Cole Sibus as Ansel Parios, Adrian Martinez as Tookie with Camryn Manheim as Lieutenant Cosgrove and Michael Ealy as Detective Miles Hoffman.
Follow "Stumptown" (#Stumptown) on Instagram, Twitter and Facebook.

COMEDIES
MIXED-ISH
In "mixed-ish," Rainbow Johnson recounts her experience growing up in a mixed-race family in the '80s and the constant dilemmas they had to face over whether to assimilate or stay true to themselves. Bow's parents Paul and Alicia decide to move from a hippie commune to the suburbs to better provide for their family. As her parents struggle with the challenges of their new life, Bow and her siblings navigate a mainstream school in which they're perceived as neither black nor white. This family's experiences illuminate the challenges of finding one's own identity when the rest of the world can't decide where you belong.
Peter Saji and Kenya Barris are writers and executive producers along with Tracee Ellis Ross, Randall Winston, Artists First (Brian Dobbins), Cinema Gypsy (Laurence Fishburne and Helen Sugland) and Anthony Anderson. Anton Cropper directed the pilot. The series is produced by ABC Studios. ABC Studios is a part of Disney Television Studios, a collection of studios comprised of 20th Century Fox Television, ABC Studios and Fox 21 Television Studios.
Cast: Arica Himmel as Bow Johnson, Tika Sumpter as Alicia Johnson, Gary Cole as Harrison Johnson, Christina Anthony as Denise, Mykal-Michelle Harris as Santamonica Johnson and Ethan Childress as Johan Johnson.
Follow "mixed-ish" (#mixedish) on Instagram, Twitter and Facebook.

UNITED WE FALL
"United We Fall" is a profoundly realistic family sitcom that follows the trials and tribulations of Jo (Christina Vidal) and Bill (Will Sasso), parents of two young kids, as they try to make it day to day as a functioning family. Bill's very judgmental live-in mother and Jo's large, Latinx Catholic family will never hesitate to let our couple know they're seemingly screwing up, but Bill and Jo will always have each other's backs, united against everyone - other parents, teachers, doctors, specialists, coaches, co-workers and, especially, their kids.
Julius "Goldy" Sharpe ("Making History") wrote and executive produced the pilot. Seth Gordon and Julia Gunn are also executive producers. Mark Cendrowski directed the pilot, which was produced by Sony Pictures, Exhibit A Film and ABC Studios. ABC Studios is a part of Disney Television Studios, a collection of studios comprised of 20th Century Fox Television, ABC Studios and Fox 21 Television Studios.
Cast: Will Sasso as Bill Ryan, Christina Vidal as Jo Ryan, Jane Curtin as Sandy Ryan and Ella Grace Helton as Emily Ryan.
Follow @UnitedWeFallABC (#UnitedWeFall) on Instagram, Twitter and Facebook.