XFL to Air on ABC, ESPN, FOX Sports and FS1 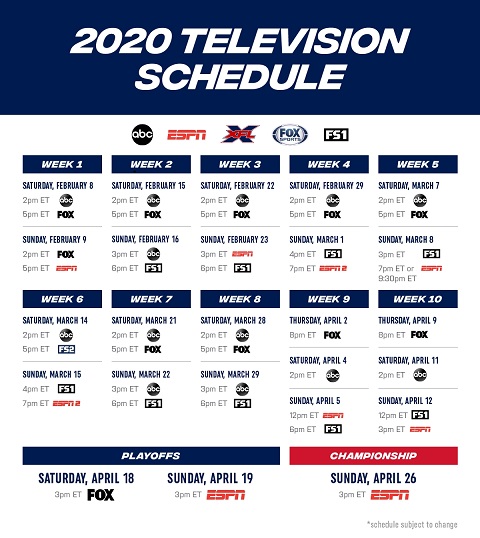 STAMFORD, Conn. -- The XFL today announced multi-year agreements with ESPN and FOX Sports to televise XFL games starting with its inaugural 2020 season. XFL games will air weekly on broadcast TV (ABC and FOX) complemented by games on cable (ESPN, ESPN2, FS1 and FS2). The XFL TV schedule allows for consistent appointment viewing each week with back-to-back games starting Saturday afternoons at 2 pm ET as well as two additional games on Sunday afternoons.
"We look forward to showcasing the XFL on ESPN and ABC, including the kickoff game and championship during the league's inaugural season," said Burke Magnus, ESPN Executive Vice President, Programming and Scheduling. "Vince McMahon and Oliver Luck are two of the sports industry's most creative and experienced leaders, and they have exciting plans for this league. We believe in their vision for the XFL, which will be a great addition to our year-round commitment to football."

"We welcome the XFL to the FOX Sports Family and are pleased to expand our relationship with Vince McMahon," said Eric Shanks, FOX Sports CEO & Executive Producer. "Football is in FOX Sports' DNA and a key component of our programming strategy. Alongside Oliver Luck and his incredible team, we're excited for the debut of the XFL on FOX Sports."

"We are thrilled to partner with ESPN and FOX Sports, two innovative media companies with extensive experience in world-class football production that will undoubtedly help us reimagine football," said Vince McMahon, XFL Founder & Chairman. "The XFL broadcast schedule provides us with incredible reach and makes it easy for fans to watch our games consistently every weekend."
The agreements were negotiated by CAA Sports and Evolution Media Capital (EMC) on behalf of the XFL.

The XFL will kick off on Saturday, February 8, 2020 with teams in Dallas, Houston, Los Angeles, New York, St. Louis, Seattle, Tampa Bay and Washington D.C. Additional XFL-themed programming and on-air talent will be announced in the future.

About the XFL
The XFL will reimagine football for the 21st century when it kicks off the weekend of February 8-9, 2020, committed to delivering a brisk, fast-paced game, with a fan-centric, innovative, and affordable gameday experience. The inaugural season will launch with teams in Dallas, Houston, Los Angeles, New York, St. Louis, Seattle, Tampa Bay, and Washington D.C. Each team will compete with a 45-man active roster over a 10-week regular season with a postseason consisting of two semifinal playoff games and a championship game. Vince McMahon, XFL Founder and Chairman, is personally funding the new league, and building the XFL with the same commitment and resolve that he has demonstrated building WWE into a global media and sports entertainment powerhouse. For more information, visit XFL.com and follow us on Twitter, Facebook, and Instagram.