KRISTIN CHENOWETH AND SCOTT WOLF DISCOVER LOVE AT THE HOLIDAYS IN ‘A CHRISTMAS LOVE STORY,’ A HALLMARK HALL OF FAME PRESENTATION PREMIERING DECEMBER 7, ON HALLMARK CHANNEL

KRISTIN CHENOWETH AND SCOTT WOLF DISCOVER LOVE AT THE HOLIDAYS IN ‘A CHRISTMAS LOVE STORY,’ A HALLMARK HALL OF FAME PRESENTATION PREMIERING DECEMBER 7, ON HALLMARK CHANNEL 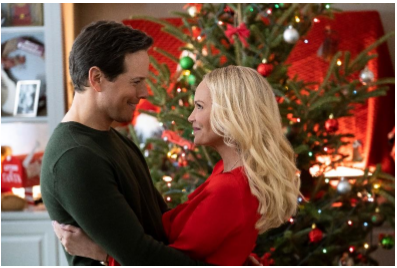 STUDIO CITY, CA – October 11, 2019 – Kristin Chenoweth (“Glee”) and Scott Wolf (“The Night Shift”) star as strangers brought together at Christmas time by fate and a secret connection neither of them knew they shared, in “A Christmas Love Story,” a Hallmark Hall of Fame presentation premiering Saturday, December 7 (8 p.m. ET/PT), on Hallmark Channel as part of the network’s beloved, number one-rated programming event, “Countdown to Christmas,” which celebrates its 10th anniversary this year.  Hallmark Channel is historically the #1 television network in all of Q4.

Youth choir director Katherine Clark (Chenoweth) is preparing her students for their annual Christmas Eve show and discovers a new teen volunteer, Danny (Kevin Quinn, “Champions”), has an incredible voice.  When she loses one of her main vocalists, Katherine tries to enlist Danny for the performance, despite his widower father Greg’s (Wolf) insistence that he focus on college applications instead.  Determined to convince Greg to let his son perform, Katherine drives to the family home to make her case and ends up spending the night with them as a snowstorm approaches.  Successful in her efforts to get Greg’s blessing, Katherine is also a bit surprised by the chemistry she’s feeling with him and a budding romance also develops.  However, just days before the big performance, Katherine discovers a life-changing secret Danny’s been keeping from her and his father which threatens to undermine this new relationship.

“A Christmas Love Story” is produced by Crown Media Productions LLC.  Jennifer Aspen and David O’Donnell serve as executive producers.  Dustin Rikert is the producer.  Eric Close directed from a script by Nicole Baxter.
Posted by Danielle at 3:58 PM