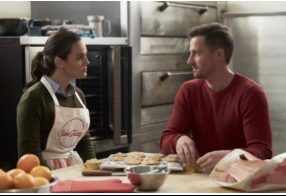 Part of the Network’s “Love Ever After” Programming Event

STUDIO CITY, CA – January 29, 2020 – Erin Cahill (“Love, Fall & Order,” “Random Acts of Christmas”) and Brendan Penny (“BH90210,” “Chesapeake Shores”) star in “The Secret Ingredient,” a new, original movie premiering Saturday, February 15 (9 p.m. ET/PT), on Hallmark Channel as part of the network’s “Love Ever After” programming event. Owner of a popular bakery, Kelly (Cahill) hasn’t thought about love since Andrew (Penny) ended their engagement five years ago to attend culinary school in Paris.  Now an executive pastry chef, Andrew is back and as soon as he and Kelly see one another their chemistry is obvious.  But Kelly is still too vulnerable and turns down Andrew’s request to see her before he leaves for New York to help a friend open a restaurant.  Trying to forget Andrew, Kelly dives into work and is bowled over when the producer of a nationwide cooking show arrives to tell her she’s been selected to be on the Valentine’s Day Bake-Off, with a $100K prize!  The catch is no one can know until the final show airs.  Even the contestants won’t meet until the end.  Flown to New York to tape 10, two-hour cooking segments, Kelly and the other contestants will create desserts with secret ingredients and judges will decide who’s eliminated.  Exhausted after the first taping, Kelly and her producer bump into Andrew and she explains they’re in New York for a conference.  Startled, he claims the woman he’s with is his friend’s wife.  As it turns out, they’re both fibbing.  In fact, they won’t learn the other’s secret until the final day of the bake-off when they’re pitted against each another.  Win or lose, it’ll be sad when Andrew goes back to Paris since he and Kelly have finally discovered the secret ingredient of why he should stay – love.  “The Secret Ingredient” is from Inferno Pictures. The executive producer is Lincoln Lageson.  The producer is Ian Dimerman.   Tibor Takacs directed from a script by S.W. Sessions.
Posted by Danielle at 2:44 PM