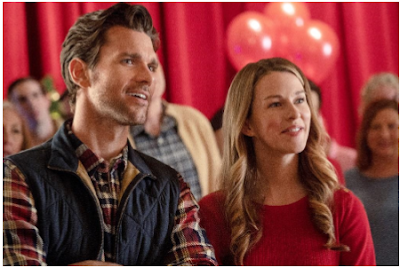 When Belinda (Shaw) returns home for Christmas she runs into her old boyfriend Dustin (McGarry), who broke her heart when she left for college and he stayed behind.  Unable to hide her delight in seeing him, Belinda flirtatiously reminds Dustin how he hurt her, adding that her new boyfriend was coming soon to celebrate Christmas with her dad Carl (Arnold), who not-sosecretly wants Belinda to get back with Dustin.  In fact, Carl is in charge of picking teams for the Christmas Scavenger Hunt, and he “accidentally” pairs Belinda with Dustin.  As they solve clues and race around town to complete various holiday activities, they also take selfies to document
the completed tasks.  But perhaps their best photo together is in front of the tree they take to the town recluse Belinda used to visit with her mother before she passed.  Truth be told, Belinda isn’t home just for the holidays – the firm she works for wants her to buy the rundown textile museum for a client who intends to tear it down to build condos.  As incentive, if Belinda seals the deal before New Year’s, she’ll be promoted to Junior Vice President.  Conflicted as she races through the Scavenger Hunt, Belinda doesn’t know how she’s going to tell Dustin, who is the director of the museum.  It might take a Christmas miracle or two for their old love to survive and for a beloved part of history to be saved.