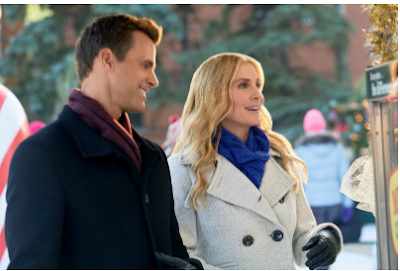 STUDIO CITY, CA – September 25, 2019 – Elizabeth Mitchell (“The Expanse,” “Dead of Summer”) and Cameron Mathison (“Love, Of Course,” “A Summer to Remember”) star in “The Christmas Club,” a new original premiering Wednesday, November 27 (8 p.m. ET/PT), on Hallmark Channel as part of the network’s beloved, number one-rated programming event, “Countdown to Christmas,” which celebrates its 10th anniversary this year.  Hallmark Channel is historically the #1 television network in all of Q4. When dance teacher Olivia (Mitchell) and business consultant Edward (Mathison) first cross paths they’re helping an elderly lady, whose Christmas Club savings blew away.  Replacing her money with their own, they go off together and wind up in the park, where a vendor gives them free pecans, the first of many pay-it-forward acts Olivia and Edward will experience.  Clearly on the same wavelength, they now spot some swings and end up in a “who can go higher” battle, ending with a heartfelt conversation and a connection so strong they awkwardly feign a need to go back to work.  But when Olivia gets to her dance studio, her magical day turns sour.  The owner of the studio has decided to sell, and Edward’s client is buying it!  Now Olivia will lose her job and there’ll be no place for the dance recital.  Then Edward shows Olivia an empty storefront where she can start her own studio.  When it looks like her loan will be delayed Olivia goes to the bank, declining Edward’s offer to help, and claims she must do this herself.  Unbelievably, word that the loan has gone through comes soon after.  Olivia is overjoyed until she spots Edward
hugging the loan officer and realizes he went behind her back.  Declaring they can’t have a relationship if he doesn’t believe in her, Olivia stubbornly leaves.  It looks like not even a little Christmas magic is going to bring these two back together, unless fate steps in.   “The Christmas Club” is a Crown Media Productions, LLC film. The executive producers Jonathan Eskenas and Kimberley Bradley.  The producer is Ian Dimerman.  Jeff Beesley directed from a screenplay by Julie Sherman Wolfe.
Posted by Danielle at 5:45 PM