Airplane Mode premieres on January 2020, only on Netflix

Airplane Mode premieres on January 2020, only on Netflix 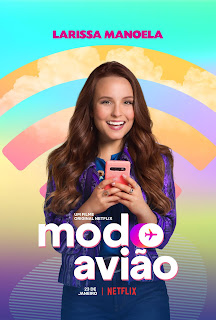 São Paulo, December 17, 2019 - Netflix revealed today the key art of Airplane Mode, Brazilian feature starred by Larissa Manoela and Erasmo Carlos. The movie, which marks the first role of Larissa in a Netflix original production, has already a premiere date. Write down on your calendar: January 23, 2020.
The film tells the story of young digital influencer Ana (Larissa Manoela). Addicted to her mobile phone, she is the type of person that collects traffic incidents because she won’t put her smartphone away even when she drives. One day, Ana crashes the car and is taken to the hospital. As a punishment, she is sent to the farm of her grandfather Germano (Erasmo Carlos) with no cellphone and no contact at all with social media. A full digital detox. Will Ana freak out?
Based on a mexican script by Alberto Bremer, the Brazilian adaptation of Airplane Mode is written by Renato Fagundes (Os Penetras 2, Vai que Cola - O Começo) and Alice Name-Bomtempo (Vai que Cola). The movie is directed by César Rodrigues (Vai que Cola - O Filme, Minha Mãe é um Peça 2) and produced by Luiz Noronha, Cecilia Grosso and Samanta Moraes, from the producing company A Fábrica.
About Netflix
Netflix is the world's leading streaming entertainment service with over 158 million paid memberships in over 190 countries enjoying TV series, documentaries and feature films across a wide variety of genres and languages. Members can watch as much as they want, anytime, anywhere, on any internet-connected screen. Members can play, pause and resume watching, all without commercials or commitments.
About A Fábrica
A Fábrica was founded in January 2016 by Luiz Noronha (executive director), Renato Fagundes (creative director) plus executive producers Cecília Grosso and Samanta Moraes. They have created, developed and produced hundreds of hours of movies, advertising pieces, TV shows, and new media content. The company produces both original content and briefed projects, fiction or otherwise, in any genre or format. What the projects have in common is great artistic quality, originality and focus on the audience, therefore building strong ties with partners.