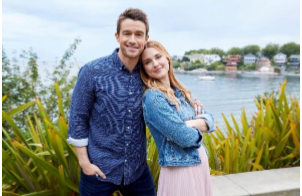 Part of the Network’s “Love Ever After” Programming Event

STUDIO CITY, CA – January 10, 2020 – Alexandra Breckenridge (“Virgin River,” “This is Us,”) and Robert Buckley (“iZombie,” “The Christmas Contract”) star alongside Jackée Harry (“Pride & Prejudice: Atlanta,” “The Cool Kids”) in “Love in Store,” new, original movie premiering Saturday, February 22 (9 p.m. ET/PT), on Hallmark Channel.   Shopping network hosts Terrie (Breckenridge) and David (Buckley) have different selling styles that draw large audiences, but off-camera their personalities clash.  Each hopes to replace Sharyn (Harry), the network star, when she retires, but first they’ll have to get along as co-hosts because Sharyn needs them to team up when a co-worker goes into labor.  Selling a high-tech umbrella, the two are in the middle of their presentation when Terrie turns on her phone to demonstrate the umbrella’s tracking device and sees a text from her boyfriend breaking up with her.  Suddenly speechless, she breaks the cardinal rule of live television, “No Dead Air,” and although David steps in to help, Terrie is mortified.  But to everyone’s surprise, viewership spiked, and now Sharyn wants them to co-host until she picks her replacement.  Hoping to learn how to work together, David and Terrie go to an Escape Room, and in the process of getting out, they find a path toward mutual respect.  But as a romantic flame builds between them, Terrie’s exboyfriend asks David to help him get Terrie back, explaining he got cold feet when she brought up marriage.  Having been burned before, David now takes a step back from his feelings for Terrie, afraid that she may have already sold her heart.

“Love in Store” is a Crown Media LLC Production.  The executive producer is Sunta Izzicupo.  The producers are Harvey Kahn and Charles Cooper and the supervising producer is Allen Lewis.   Paul Ziller directed from a screenplay by Joie Botkin.
Posted by Danielle at 2:06 PM