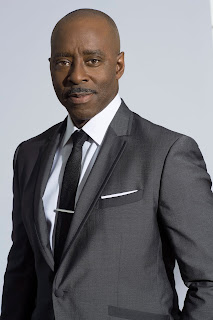 PASADENA, CA – JANUARY 16, 2020 – AMC announced today from the Television Critics’ Association (TCA) Press Tour that Emmy® Award-winner Courtney B. Vance (The People v. O. J. Simpson: American Crime Story, Lovecraft Country, Genius) will star in its upcoming thrilling courtroom drama 61st Street, from BAFTA-winner Peter Moffat (Criminal Justice, The Night Of, Your Honor) and executive produced by Michael B. Jordan and Alana Mayo of Outlier Society (Just Mercy, David Makes Man).  Produced by AMC Studios, the series, which has been ordered as a two-season television event with eight episodes per season, is set to debut in 2021.
Said Sarah Barnett, president of AMC Networks Entertainment Group and AMC Studios, “We couldn’t be more thrilled to have the phenomenal Courtney B. Vance returning to the courtroom for 61st Street.  Courtney is the cornerstone of what’s sure to be a stellar ensemble for this ambitious and highly entertaining drama.”
61st Street is a propulsive courtroom drama that follows Moses Johnson, a promising, black high school athlete, who is swept up into the infamously corrupt Chicago criminal justice system.  Taken by the police as a supposed gang member, he finds himself in the eye of the storm as police and prosecutors seek revenge for the death of an officer during a drug bust gone wrong.
Vance will portray Franklin Roberts, a public defender in the twilight of his career serving the busiest courthouse in America. After promising his wife he’d retire to spend more time with their seventeen-year-old autistic son, Franklin realizes Moses Johnson is the case of a lifetime, one that can upend the entire Chicago judicial system, challenging the institutional racism and endemic corruption at its heart.
61st Street is executive produced by Jordan, Mayo and Hilary Salmon (MotherFatherSon, The Night Of, London Spy).  Moffat serves as showrunner and executive producer alongside J. David Shanks (The Chi, Seven Seconds, Shots Fired). AMC Studios Content Distribution will manage worldwide sales.
Most recently, Vance joined the cast of Nat Geo’s Genius.  His upcoming films include the Universal romantic drama The Photograph and Netflix’s Uncorked, and he will also appear in HBO’s upcoming Lovecraft Country.  Last year, he co-starred in Ben is Back, alongside Julia Roberts and Lucas Hedges. Other recent film work has included Wes Anderson’s Isle of Dogs, the reboot of The Mummy, Office Christmas Party and The Immortal Life of Henrietta Lacks. On television, in addition to his Emmy® Award-winning role as Johnnie Cochran on FX’s The People v. O. J. Simpson: American Crime Story, Vance has appeared in ABC’s Scandal and Revenge, Showtime’s Masters of Sex, NBC’s ER and Law & Order: Criminal Intent, and TNT’s The Closer. Notably, last year, Vance was announced as the new President of the SAG-AFTRA Foundation, succeeding actress JoBeth Williams.
About AMC
AMC is home to some of the most popular and acclaimed programs on television. AMC was the first basic cable network to ever win the Emmy® Award for Outstanding Drama Series with Mad Men in 2008, which then went on to win the coveted award four years in a row, before Breaking Bad won it in 2013 and 2014. The network’s series The Walking Dead is the highest-rated series in cable history. AMC’s current original drama series are Better Call Saul, Fear the Walking Dead, The Terror, Preacher, McMafia, Lodge 49, NOS4A2, as well as the forthcoming series Dispatches from Elsewhere, Quiz, a third show from the world of The Walking Dead, Soulmates, and the recently greenlit 61st Street and Kevin Can F**k Himself. AMC also explores authentic worlds and discussion with original shows like Talking Dead, AMC Visionaries and Ride with Norman Reedus. AMC is owned and operated by AMC Networks Inc. and its sister networks include IFC, SundanceTV, BBC America and WE tv. AMC is available across all platforms, including on-air, online, on demand and mobile.
About AMC Studios
AMC Studios is the in-house studio, production and distribution operation for AMC Networks Inc. AMC Studios’ first series, The Walking Dead, is the highest-rated series in cable history. Since then, AMC Studios has produced several critically acclaimed, award-winning and culturally distinctive originals for AMC including scripted series Fear the Walking Dead; The Terror anthology, Lodge 49, NOS4A2 and the upcoming Dispatches From Elsewhere, Soulmates, 61st Street and Kevin Can F**k Himself, as well as unscripted series: Ride with Norman Reedus, James Cameron’s Story Of Science Fiction, Eli Roth’s History of Horror and Hip Hop: The Songs that Shook America. The Studio has also produced for SundanceTV the Peabody Award-winning Rectify, original series Hap and Leonard, as well as the unscripted true crime franchise including Cold Blooded: The Clutter Family Murders and The Preppy Murder: Death in Central Park.