ALI LIEBERT, PETER PORTE AND ALONG WITH TINA LIFFORD STAR IN ‘CHERISHED MEMORIES: A GIFT TO REMEMBER 2,’ A NEW, ORIGINAL MOVIE PREMIERING NOVEMBER 24, ON HALLMARK CHANNEL

ALI LIEBERT, PETER PORTE AND ALONG WITH TINA LIFFORD STAR IN ‘CHERISHED MEMORIES: A GIFT TO REMEMBER 2,’ A NEW, ORIGINAL MOVIE PREMIERING NOVEMBER 24, ON HALLMARK CHANNEL 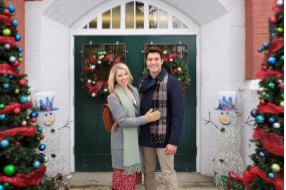 STUDIO CITY, CA – October 24, 2019– Ali Liebert (“Mech-X4,” “When Calls the Heart”), Peter Porte (“Rome in Love,” “Christmas Harmony,” “Love, Once and Always”) and Tina Lifford (“Queen Sugar,” “Scandal”), star in “Cherished Memories: A Gift to Remember 2,” a new original premiering Thursday, November 24 (8 p.m. ET/PT), on Hallmark Channel as part of the network’s beloved, number one-rated programming event, “Countdown to Christmas,” which celebrates its 10th anniversary this year.  Hallmark Channel is historically the #1 television network in all of Q4. A year after Darcy (Liebert) ran into Aiden (Porte) on her bicycle their love is stronger than ever, and she’s happy he’s coming over to decorate her tree.  But Darcy’s mood changes when Aiden finds a box marked “Christmas Village.”  Finally, she reveals the box holds tiny carved buildings of her mother’s hometown that her dad made every Christmas.  A testament to her parents’ love, the carvings make Darcy miss them even more.  Meanwhile, Darcy and Aiden’s neighbor Mrs. Henley (Lifford), has her hands full with her nephew, whose parents are serving overseas.  Fortunately, Bailey, Aiden’s dog, cheers up the boy, who also helps Aiden create Darcy’s surprise Christmas gift – a tiny wooden replica of her hometown, complete with the Rec Center where she played and the house where she grew up.  But Aiden’s gift will soon mean even more to Darcy, who has just learned her beloved Rec Center is closing.  Trying to get the Society for Historic Preservation to declare the building a historic landmark, Darcy is also hoping her Christmas present to Aiden will stand up to whatever he’s been working on.  Her gift – a first edition, signed copy of Aiden’s favorite book, Patricia Highsmith’s Found in the Street – does seem perfect, especially since she did find him in the street, albeit under her bicycle!  Still Aiden’s replica of Darcy’s hometown will be a gift to remember, especially when he reveals another big surprise.


“Cherished Memories: A Gift to Remember 2” is A Reel One Entertainment production in association with Vesuvius Productions film. The executive producers are Tom Berry and Angela Mancuso, and the producer is Giles Laplante.  Kevin Fair directed from a screenplay by Topher Payne, based on the book A Gift to Remember by Melissa Hill.
Posted by Danielle at 7:42 PM