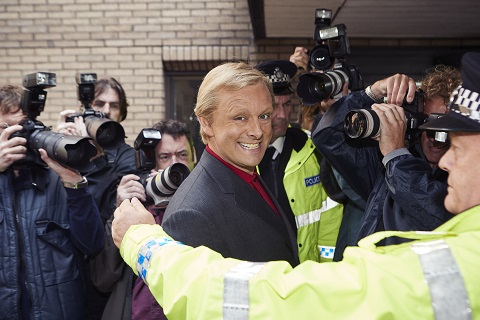 NEW YORK, NY - November 14, 2019 - AMC revealed a first look at Michael Sheen as TV Presenter Chris Tarrant in the upcoming three-part drama, Quiz. Directed by globally renowned director Stephen Frears (A Very English Scandal, Florence Foster Jenkins, Philomena, The Queen) and written by playwright James Graham (Brexit: An Uncivil War, Ink, This House, Labour of Love), Quiz tells the extraordinary and sensational story of how Charles and Diana Ingram attempted an 'audacious heist' on the quiz show Who Wants to Be a Millionaire? The image recreates the famous shot of Tarrant arriving to give evidence in the Ingram trial at Southwark Crown Court in March 2003.

Major Ingram (Matthew Macfadyen), his wife Diana (Sian Clifford) and an accomplice, Tecwen Whittock (Michael Jibson), who was sitting in the audience, were accused of cheating their way to a million pounds on what was the most popular game show on earth in 2001. The couple stood trial for conspiring by coughing during the recording to signify the correct answers to the multiple-choice questions posed to the Major by host, Chris Tarrant.

About AMC
AMC is home to some of the most popular and acclaimed programs on television. AMC was the first basic cable network to ever win the Emmy(R) Award for Outstanding Drama Series with Mad Men in 2008, which then went on to win the coveted award four years in a row, before Breaking Bad won it in 2013 and 2014. The network's series The Walking Dead is the highest-rated series in cable history. AMC's current original drama series are Better Call Saul, Fear the Walking Dead, The Terror, Preacher, McMafia, Lodge 49, NOS4A2, as well as the forthcoming series Dispatches from Elsewhere, Quiz, a third show from the world of The Walking Dead, an episodic anthology from Will Bridges and Brett Goldstein, and the recently greenlit 61st Street and Kevin Can F**k Himself. AMC also explores authentic worlds and discussion with original shows like Talking Dead, AMC Visionaries and Ride with Norman Reedus. AMC is owned and operated by AMC Networks Inc. and its sister networks include IFC, SundanceTV, BBC America and WE tv. AMC is available across all platforms, including on-air, online, on demand and mobile.