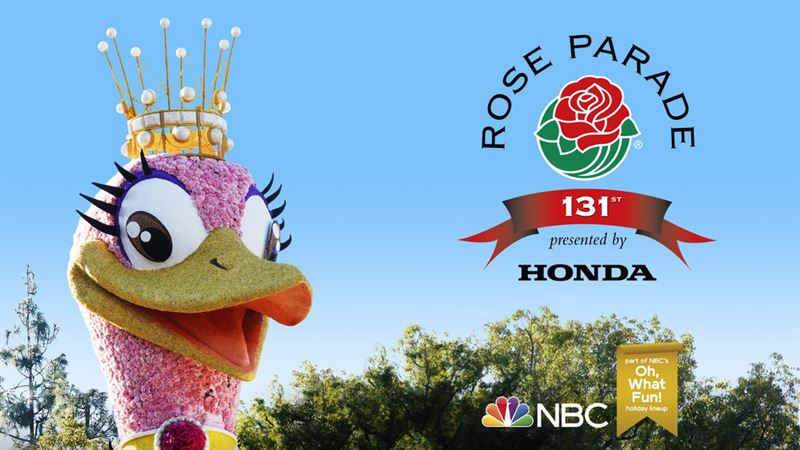 Most NBC affiliates will also air optional coverage of the parade from 11-11:30 a.m. ET. Al Roker, “TODAY” weather anchor, and Hoda Kotb, co-anchor of “TODAY” and co-host of the fourth hour of “TODAY,” will co-host NBC’s high-definition coverage.

The 2020 telecast will mark Roker’s 23rd year as host and the seventh year for Kotb. NBC is celebrating its 93rd year broadcasting the Rose Parade, beginning on radio in 1927 and then televising the popular annual event beginning in 1954.

Rita Moreno, Gina Torres and Laurie Hernandez will serve as the 2020 Grand Marshals.

Moreno is one of only a few artists to have achieved EGOT status, having earned two Emmy Awards, a Grammy Award, an Oscar and Tony Award for her prolific career in film, television, music and on Broadway.

Torres is well-known for her acting and producing roles on USA Network’s “Suits” and “Pearson,” as well as her numerous film, stage and philanthropic endeavors.

Hernandez earned gold and silver medals as a member of the 2016 U.S. Olympic women’s gymnastics team and is an accomplished writer and TV personality. These three women embody what is possible through the theme of this year’s parade, “The Power of Hope.”

Nearly a thousand white-glove volunteers will spend more than 80,000 meticulous hours creating this year’s 45 masterpiece floral floats that will span up to 75-feet long and up to 35-feet high. The floats will feature effects such as pyrotechnics, smoke, waterfalls, streamers and bubbles. Adding to the celebration will be a B-2 Spirit flyover, a celebrity football toss, hundreds of energetic performers, 23 marching bands from across the U.S and around the globe, 16 equestrian teams that include Arabian horses, majestic Clydesdales and the USMC Mounted Color Guard, and the famous Rose Queen with her royal court.

The Grand Finale, presented by Wells Fargo, will close out the parade with performances by Alejandro Aranda, known as “Scarypoolparty,” and legendary East Los Angeles rock band Los Lobos.

More than 700,000 spectators will line the five-and-a-half mile parade route joined by over 65 million people in more than 170 countries watching the telecast.

The “131st Rose Parade,” presented by Honda, is produced by LX.TV, a production unit of the NBC Owned Television Stations.
Posted by Danielle at 5:31 PM