Pringles(R) Returns to the Big Game with "Rick and Morty"

Pringles(R) Returns to the Big Game with "Rick and Morty"
The :30 spot is created by Adult Swim in partnership with Grey Group and will air during the second quarter of the game. [via press release from Adult Swim] PRINGLES(R) 'FLAVOR STACKING' RETURNS TO THE BIG GAME FOR THE THIRD YEAR IN A ROW WITH AN OUT OF THIS WORLD TWIST
The 2020 Ad Kicks off a Partnership with the Popular Adult Swim(TM) Multiverse Duo, Rick and Morty 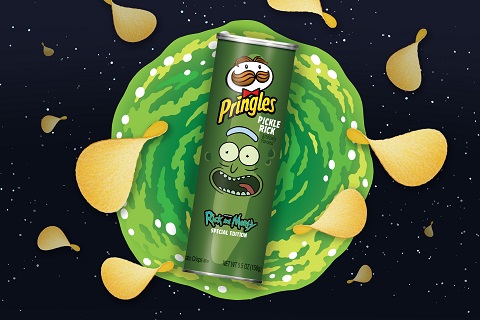 BATTLE CREEK, Mich., December 11, 2019 - For the 2020 Big Game, Pringles(R) is returning for the third year in a row, but this time in partnership with the biggest pop culture hit around, Adult Swim's award-winning series Rick and Morty(TM).

Known for its bold flavors, playful nature and endless stacking possibilities, Pringles will this year test the limits with Rick and Morty, in a humorous, mind-bending animated spot. And because of the intense fandom around Rick and Morty, the partnership will feature a flavor of their very own.
To pay homage to the viral hit episode "Pickle Rick"(TM) - in which mad scientist Rick Sanchez turns himself into a pickle to avoid family therapy - Pringles is launching a special edition, collectable Pickle Rick flavor inspired from the award-winning series. These crisps hit shelves coast to coast timed around the Big Game, but only in our universe (C-137).

"We want to do something completely new for the brand for the 2020 Big Game and are thrilled to be partnering with Adult Swim and Rick and Morty, a show which continues to grow in popularity year after year and enjoys a cult fan following," said Gareth Maguire, senior director of marketing for Pringles. "We hope the new special edition Pickle Rick flavor will be a hit with the show's fans."
The :30 spot is created by Adult Swim in partnership with Grey Group and will air during the second quarter of the game. The ad will be supported by a fully integrated marketing campaign including PR, digital, social media, e-commerce and product sampling.

"We're very thoughtful about who we partner with around Rick and Morty and we couldn't be more pleased with our new relationship with Pringles," said Jill King, senior vice president, marketing and partnerships, Adult Swim. "Not only are the Rick and Morty show creators making a hilarious spot for the Big Game, we're extending this partnership in really exciting ways, all year long. Rick and Morty fans are going to be given amazing new opportunities to illustrate their love for this iconic show, thanks to Pringles."

Pick up Pringles Pickle Rick crisps in the snack aisle of grocery stores nationwide beginning in early February and don't miss the Pringles Big Game ad in the second quarter. For more information follow @Pringles on Instagram, Twitter and check out Facebook.com/Pringles.

About Kellogg Company
At Kellogg Company (NYSE: K), we strive to enrich and delight the world through foods and brands that matter. Our beloved brands include Pringles(R), Cheez-It(R), Special K(R), Kellogg's Frosted Flakes(R), Pop-Tarts(R), Kellogg's Corn Flakes(R), Rice Krispies(R), Eggo(R), Mini-Wheats(R), Kashi(R), RXBAR(R), MorningStar Farms(R) and more. Net sales in 2018 were approximately $13.5 billion, comprised principally of snacks and convenience foods like cereal and frozen foods. Kellogg brands are beloved in markets around the world. We are also a company with Heart & Soul, committed to creating Better Days for 3 billion people by the end of 2030 through our Kellogg's(R) Better Days global purpose platform. Visit www.KelloggCompany.com or www.OpenforBreakfast.com.

About Adult Swim
Adult Swim (AdultSwim.com), launched in 2001, is a WarnerMedia network offering original and acquired animated and live-action series for young adults. Airing nightly from 8 p.m. to 6 a.m. (ET/PT), Adult Swim is the #1 network with persons 18-34 and 18-49 and is seen in 94 million U.S. homes.