Hourlong Special on Thursday, Jan. 2 Goes Behind the Scenes and Examines What Makes “SVU” Such an Enduring and Beloved Series 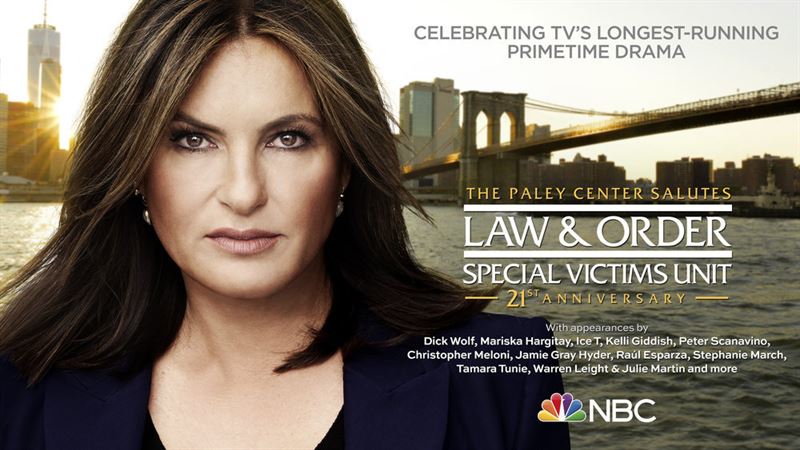 “We thank the Paley Center and NBC for making this special acknowledging ‘SVU’s historic 21st season,” Wolf said. “We’re excited for viewers to see this retrospective, which chronicles over two decades of groundbreaking television.”

“Since 1999, ‘SVU’ has made remarkable social impact through emotional and skillful storytelling,” said Maureen J. Reidy, the Paley Center’s President & CEO. “We’re honored to partner with NBC to present fans with this special behind-the-scenes look at this historic series.”

With the series now in its record-breaking 21st season, it’s time to go back to the beginning, take a look behind the scenes and hear from the stars, creators and crew members who have brought incredibly impactful stories to life week after week. The special also includes many of the most memorable scenes and features interviews with some of the famous guests who have stopped by to take part in the show.

“Law & Order: SVU” has had a remarkable social impact. The series has received numerous accolades for its handling of very sensitive issues and Hargitay has taken her onscreen work offscreen, founding the Joyful Heart Foundation in 2004 to help victims of sexual abuse.

“SVU” won the Imagen Foundation Award in 2015 for Best Primetime Program, recognizing the positive portrayal of Latinos in media. The series was honored with the NAACP Image Award for Outstanding Drama Series in 2012. Fourteen episodes of “SVU” were nominated for the Prism Award and six have won, recognizing their accurate depiction of substance abuse and mental illness. Four episodes have been nominated by the GLAAD Media Awards for outstanding representation of the LGBTQ community, and the show was honored with 11 Edgar Allan Poe Award nominations and two wins for Best Television episode.