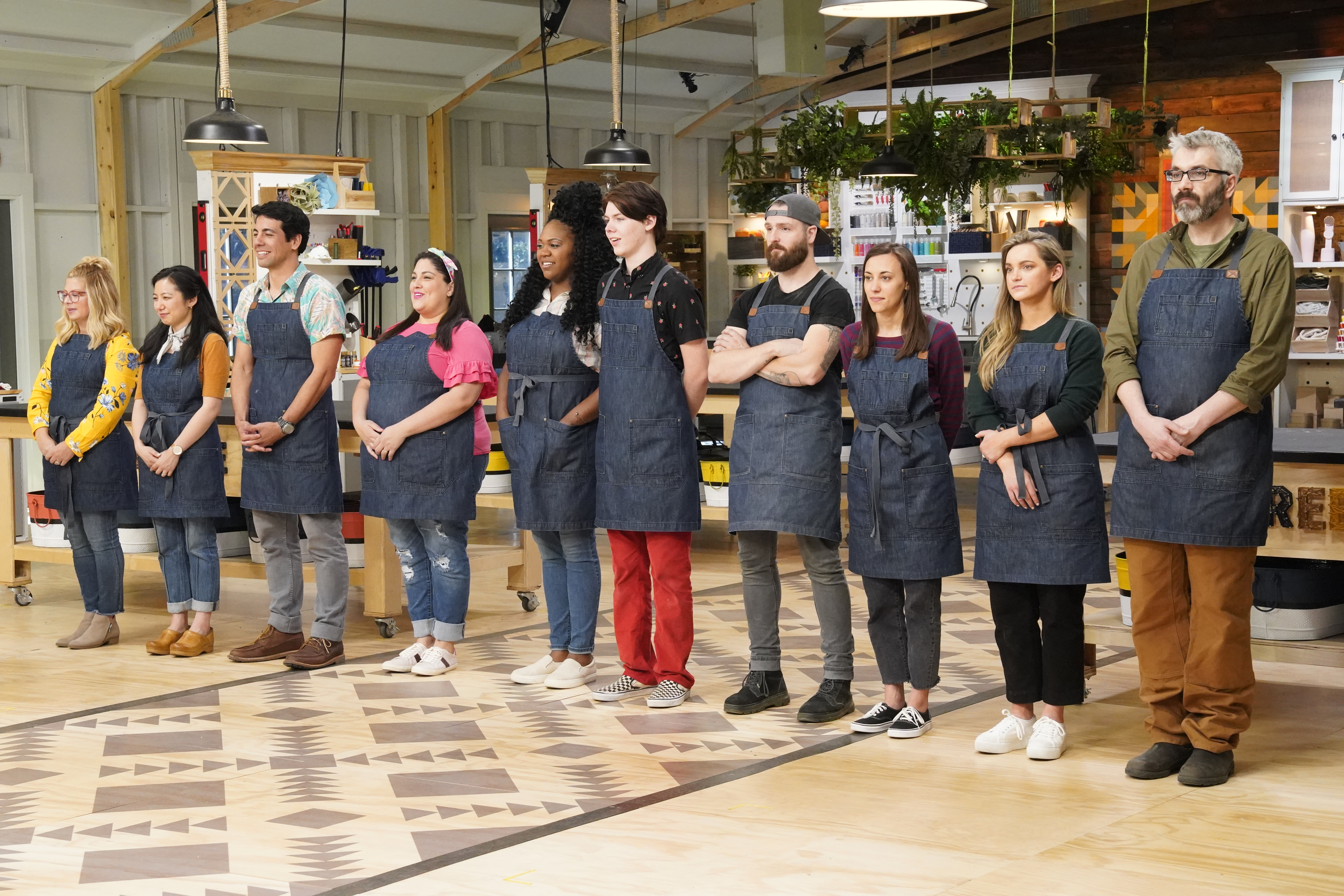 In a binge-worthy holiday treat, “Making It” will air Dec. 2-5 (10-11 p.m.), Dec. 9 (10-11 p.m.) and Dec. 10 (10-11 p.m.) before concluding with a two-hour grand finale telecast on Wednesday, Dec. 11 (9-11 p.m.). This season brings together a diverse group of makers from woodworkers to balloon artists and calligraphists to costume makers. These ultimate DIY-ers bring skill and heart as they create with mediums from food to felt, hoping to impress the judges and become “Master Maker.”

ASHLEY BASNIGHT (Norman, OK)
Ashley is a Boeing software engineer who found her passion for making when she needed a dining room table. She couldn’t find what she wanted at an affordable price, so she decided to do it herself. When she’s not working on the B52 Bomber, Ashley writes about her woodworking projects on her DIY blog “Handmade Haven” and was sponsored by Home Depot to build her own deck. Ashley is eager to show the world that you can do anything you set your mind to, and you can look good doing it.
Instagram: @smashingdiy

ASPEN VO HASSE (Marina, CA / San Francisco, CA)
After switching her focus from pre-optometry to design in college, Aspen has spent her post-grad years discovering herself as an artist. She worked for several years as a display coordinator for Anthropologie before deciding to become a full-time calligrapher. A recent newlywed, Aspen brought her European-inspired wedding to life by building a custom dance floor and calligraphing her invitations and day-of paper goods. Her dream is to open a brick-and-mortar studio that provides calligraphy and letterpress services and hosts workshops and events.
Instagram: @aspenhasse
EAGAN TILGHMAN (Meridian, MS)
After being bullied in school, Eagan found solace in making. He is a pastor’s son who crafts with anything he can find around the house. His favorite is making elaborate costumes for his seven siblings. He frequently dresses them up as iconic movie characters, and his rendition of his little brother as Pennywise from the movie “IT” went viral. He hopes to become a set designer for movies one day.
Instagram: @eag2n
FLOYD DAVIS (Chicago, IL / Los Angeles, CA)
Floyd was raised an hour north of Chicago on a hobby farm and learned the love of making from his parents, sister and Aunt B. He recently moved to Los Angeles to pursue releasing his fine art and music. He is a multi-disciplinary artist making large-scale installations for musicians, small businesses and global brands such as Chance the Rapper, Lyrical Lemonade, Red Bull and Facebook.
Instagram: @floydadavisiv
JAMIE HUDSON (Portland, OR)
Jamie is a PhD scientist who started a crafting company to spend more time with his artist wife. Together they run 20 Leagues, where they make and sell quirky crafts and gifts. Jamie considers himself a lifelong maker, combining his knowledge of science, manufacturing and robotics with his love of making and the making community.
Instagram: @20Leagues
JESSIE BEARDEN (Austin, TX / New York, NY)
Jessie is a multi-disciplinary artist and creative known mostly for her portraits of pop culture icons using non-traditional materials. As a creative, her wide scope of work ranges from illustration and design to creative direction of a music video. Her work has been featured in American Express and ESPN commercials, Gap advertisements, Taylor Swift’s music video and more. She has also been featured on “Today” and in Time magazine.
Instagram: @jessiebearden
JUSTINE SILVA (Andover, MA / Los Angeles, CA)
Justine is a designer and maker specializing in interior and spatial design. She worked for Anthropologie for many years creating large scale art installations in their windows and retail stores. She recently moved to the West Coast to pursue a career in project management and interior design. She is excited to roll up her sleeves and revisit her passion for making things on this season of “Making It.”
Instagram: @justine.silva
LILLY JIMENEZ (Miami, FL)
Lilly was raised by a single immigrant mom and is dedicated to giving her two children a life full of experiences and opportunities. She is a self–taught balloon artist, a DIY content designer and the creator of Balloon Mosaic™️, an innovative digital product for at-home makers. Lilly is passionate about helping moms work big magic on a small budget to create beautiful, memorable celebrations.
Instagram: @thecreativeheartstudio
MATT KAWIKA ORTIZ (Honolulu, HI)
Matt is a muralist, surfer, skater and the father of a 3-year-old boy. As a native Hawaiian, Matt draws upon his culture to influence much of his artwork. He and wife Roxy are in business together creating beautiful art at their studio Wooden Wave. They are known for their whimsical murals of sustainable treehouses, which can be visited across the nation. Matt’s artwork has been featured in the Smithsonian and in various art venues worldwide.
Instagram: @wooden_wave
REBECCA PROPES (Gilbert, AZ)
Rebecca is a mom to three boys living in Arizona. She went back to school at 30 to become an interior designer and now runs her own DIY | Design | Lifestyle Blog & Etsy shop. She has also contributed as a design expert for Project Nursery, Domino and Joann in addition to working with major brands such as Home Depot, Land of Nod, Spoonflower and Rugs USA. Rebecca loves to inspire people to create and wants to show everyone that if you dream it, you can make it happen.
Instagram: @rebeccadiy

Each episode will revolve around a central theme with the Makers completing two crafts based on current trends in DIY and anchored in America’s love for all things handmade. The first, a “faster-craft,” gives the Makers a limited time to execute their personal take on each theme. Next is the more in-depth “master craft,” challenging each Maker to display their respective expertise while combining originality, imagination, and quality finishing to move on to the next round of the competition. In the end, the winning contestant will be crowned “Master Maker.”