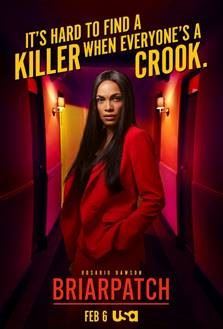 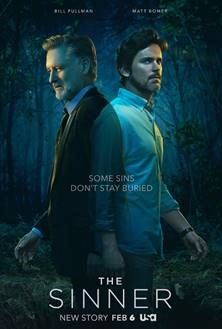 This winter, USA Network will unveil a night of murder, mystery and manipulation. On February 6, the close-ended 10-episode anthology series BRIARPATCH -- starring Rosario Dawson -- debuts at 10/9c. Leading the night is the return of the limited series, THE SINNER, starring Bill Pullman, Matt Bomer and Chris Messina, which returns at 9/8c for a new 8-episode chapter.

ABOUT ‘BRIARPATCH’:
BRIARPATCH follows Allegra Dill (Dawson), as a no-nonsense professional who returns to her quirky hometown to solve her sister’s murder. The season celebrates the beloved genres represented by Ross Thomas’ book -- a stylish blend of crime and pulp fiction -- while updating his sense of fun, danger and place for a new generation. The series -- also starring Jay R. Ferguson, Edi Gathegi, Brian Geraghty and Kim Dickens – is written for television by Greenwald, who will executive produce along with MR. ROBOT creator Sam Esmail through his production company Esmail Corp and Anonymous Content’s Chad Hamilton. The series hails from UCP and Paramount Television.
Follow along on social:

ABOUT ‘THE SINNER’:
THE SINNER’s third installment follows Detective Harry Ambrose (Pullman) as he begins a routine investigation of a tragic car accident on the outskirts of Dorchester, in upstate New York. Ambrose uncovers a hidden crime that pulls him into the most dangerous and disturbing case of his career. THE SINNER will bring back Derek Simonds as executive producer and showrunner, Jessica Biel and Michelle Purple as executive producers through their company Iron Ocean, and Charlie Gogolak as executive producer. Willie Reale will serve as executive producer. Adam Bernstein (“Fargo,” “Breaking Bad”) is set to direct the first two episodes and will also executive produce. The series hails from UCP.
Follow along on social: