EXTRAS: Deleted Scenes
-----Season Four sizzles with fiendishly clever comebacks! The charismatic, handsome Lucifer Morningstar returns resurrected after Season Three's wicked cliffhanger. His unofficial partner in crime-solving and in affairs of the heart, LAPD detective Chloe Decker, returns from an extended vacation...after she saw Lucifer's devil face for the first time and realized he was, in fact, exactly the man he always claimed to be. And, finally, new to the series (but not to the Lord of Hell) comes old flame and original sinner, Eve, whose charms are as tempting to Lucifer now as the serpent's big, red apple was to her back in the day. Does she want revenge for her expulsion from Eden all those years ago? Or something else entirely? Personal demons get conquered, and crimes get solved. But will things ever get right with Deckerstar? Only time - and ten scandalous new episodes - will tell.
NOTE: So tell me, what it is that you truly desire? More? Okay! Michael Ausiello (formerly of TVGuide) has reported yesterday at his TVLine website (a sister compamy of Variety) that while the "fifth and final season" of the show is now in its last few weeks of production (16 episodes, to stream as two separate 8-episode blocks, debuting at some point during this year), Netflix and Warner are currently discussing the POSSIBLE continuation of Lucifer into a SIXTH season! Will they #SaveLucifer once again? Stay tuned!
.
COMING ON 5/19:
* The Brokenwood Mysteries - Series 6 (RLJ/Acorn)
$59.99 SRP DVD; $59.99 SRP Blu-ray 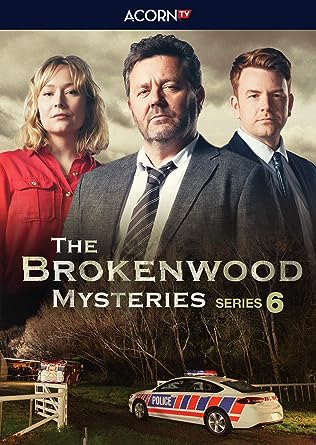 -----In Series 6 of this charming New Zealand mystery, detectives Mike Shepherd (Neill Rea), Kristin Sims (Fern Sutherland), and Sam Breen (Nic Sampson) investigate a death at a steampunk event, a novelist's killing modeled on a murder in his new book, the shooting of an animal rights activist, and a suspicious suicide at a women's prison.
.
COMING ON 5/26:
* Agatha Raisin - Series 3 (RLJ/Acorn)
$39.99 SRP DVD

EXTRAS: Gag Reel; Extended Episodes
-----What On Earth? Michael Schur (Brooklyn Nine-Nine, Parks And Recreation) brings you the fourth and final season of this hilarious comedy about the afterlife. Eleanor (Kristen Bell, Veronica Mars), Chidi (William Jackson Harper), Tahani (Jameela Jamil), and Jason (Manny Jacinto) are four cosmically bound friends in the fight for their eternity, alongside their former torturer, Michael (Ted Danson, Cheers), and sentient database assistant, Janet (D'Arcy Carden, Barry). At the end of Season 3, a new test had begun. Michael, in a fit of panic, had relinquished his role as "the Architect" to Eleanor, so that she and the gang could help four new residents become better people. Unfortunately, the Bad Place doesn't exactly make their task easy and its latest move places Chidi in a dire situation, putting his relationship with Eleanor and the others in jeopardy. 2-disc set.
* The Good Place - The Complete Series: Collector's Edition (Shout!)
$69.97 SRP Blu-ray

EXTRAS: are in progress, and will be announced at a later date
-----Welcome! Everything Is Fine! What happens when we die? It's a question everyone has asked, since the beginning of time. But when Eleanor Shellstrop (Kristen Bell, Veronica Mars) dies tragically, she finds out that the afterlife is amazing: full of frozen yogurt, soulmates, and wonderful people who have done incredible things with their lives. It is absolutely perfect. The only problem is Eleanor herself. She isn't supposed to be in The Good Place. In fact, her life decisions wouldn't have gotten her even close. But due to a clerical error, she's been given someone else's reward, and now has to struggle with being good in order to make sure her secret isn't discovered. From Michael Schur, executive producer of Brooklyn Nine-Nine and Parks And Recreation, comes the hilarious complete series of this refreshingly original comedy co-starring Ted Danson (Cheers) in an Emmy Award-nominated performance, D'Arcy Carden (HBO's Barry), William Jackson Harper, Jameela Jamil and Manny Jacinto. 9-disc set.

EXTRAS: Deleted Scenes
-----In Season 10, Frank's exploits lead him to an old friend, Debbie rules over the Gallagher household with an iron fist, Lip navigates his relationship (and parenthood) with Tami, Carl faces life after military school, Liam is tutored by V about black history and culture, and Kev has an identity crisis. Plus, "Gallavich" returns as Ian and Mickey rekindle their romance in prison as both cellmates and lovers. 3-disc set.
NOTE: the date listed at the DeepDiscount link provided above is 4/28, but the press release we received from Warner shows that such a date is wrong. The official studio press release says the DVD release date is 5/12. Furthermore, please be aware that the press release does NOT mention any Blu-ray version, either in stores or via Warner Archive. It's possible that a Blu version of this title will still be released...but as of this writing, we have no knowledge of one. IF the studio announces a Blu version, we'll post about it in a future Roundup.