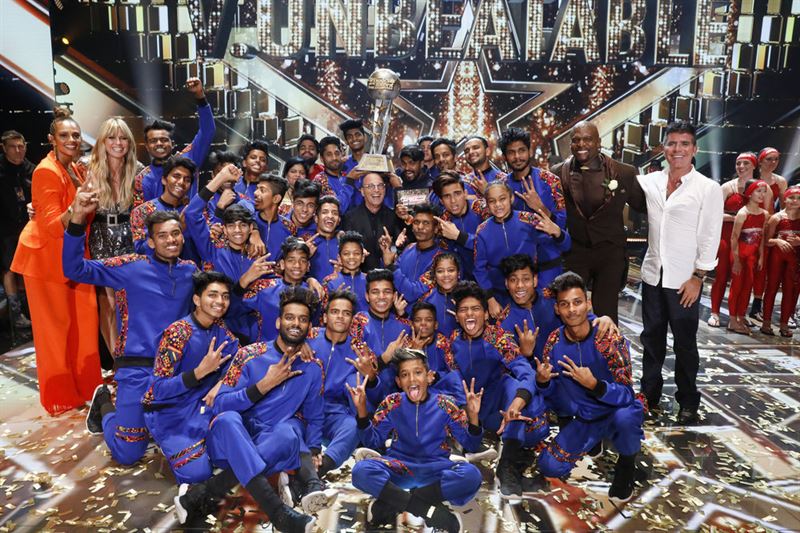 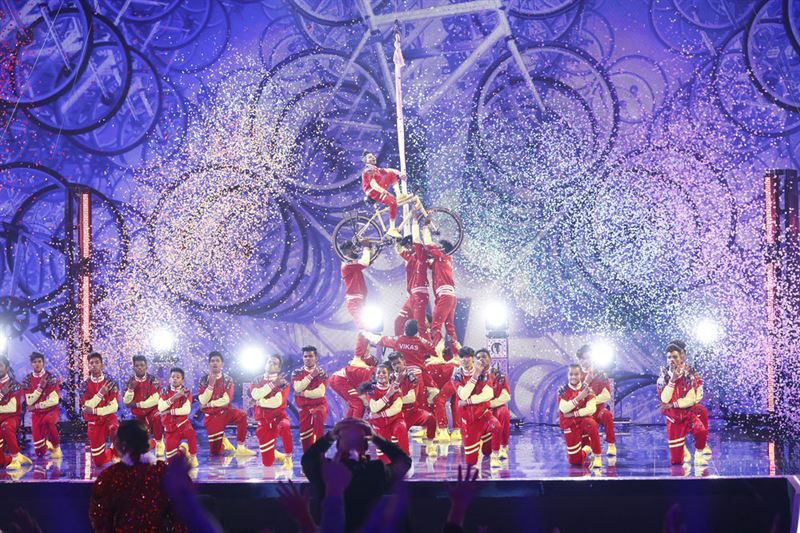 UNIVERSAL CITY, Calif. – Feb. 17, 2020 – Superfans representing all 50 states have voted and crowned the India-based dance group V.Unbeatable as the second season winner of “America’s Got Talent: The Champions.”

The group originally captivated audiences when appearing on Season 14 of “America’s Got Talent.” After placing fourth, the group looked for a second chance at winning as one of the elite group of acts on “AGT: The Champions.” They quickly wowed all four judges with their epic return and earned the Golden Buzzer from Howie Mandel, which sent them straight through to the finals. Despite having more than 30 dancers in the crew, with each in-sync and high-energy acrobatic performance, V.Unbeatable lived up to their name and proved to be truly unbeatable.

V.Unbeatable, originally named Unbeatable was founded by Vikas and Om Prakash. After a horrible accident during a group rehearsal, in which Vikas was injured and passed away, the group renamed itself V.Unbeatable (for Vikas Unbeatable) in his honor and continued to pursue Vikas’ original dreams for the group.

“I loved V.Unbeatable from the minute I first saw them perform. They always give it everything, they perform from the heart and they just keep getting better and better! Congratulations, you’re all incredible and I couldn’t be happier for you,” said executive producer and judge Simon Cowell.

Finishing in second place was Duo Transcend. The Utah-based trapeze artists first competed on “America’s Got Talent” during Season 13 and wowed everyone with their breath-catching stunts. Young violinist Tyler Butler-Figueroa finished in third place and was able to touch the hearts of millions of people around the world with his incredible story and gift. He first appeared on Season 14 of “America’s Got Talent.”

This season “America’s Got Talent: The Champions” has averaged a 1.4 rating in 18-49 and 8.9 viewers overall in “live plus seven day” Nielsens, and ranked as Monday night’s #1 most-watched entertainment show each time it aired (“live plus same day”). With digital and linear delayed viewing to date, the show’s Jan. 6 season premiere has grown to a 2.1 rating in 18-49 and 11.1 million viewers overall.

Official “AGT” program social accounts are the most engaging for any broadcast reality series this year on Facebook, Instagram and Twitter. “AGT: The Champions” has garnered over 4.9 million total interactions in 2020 so far, with Marcelito Pomoy’s first performance the most viewed video from season two with more than 80 million views across Facebook and YouTube.

The “Got Talent” format has had more than a billion global viewers since it began airing in 2006 in America and has aired in 194 territories worldwide. “Got Talent” holds the Guinness World Records title as the Most Successful Reality Television Format in history, with more than 70 local versions produced across Europe, Asia Pacific, the Middle East, Africa and the Americas.

Auditions for the upcoming season of “America’s Got Talent” are still underway. Interested acts can submit an online audition at AGTauditions.com.

“America’s Got Talent” was created by Simon Cowell and is co-produced by Fremantle and Syco Entertainment. Simon Cowell, Sam Donnelly, Jason Raff, Trish Kinane and Richard Wallace are the executive producers.

ABOUT SYCO ENTERTAINMENT
Syco Entertainment, a joint venture between Simon Cowell and Sony Music, is one of the world's leading global music, film and television production companies responsible for some of the most successful global TV and music franchises and is the world's most successful producer of international talent. In 2017, Syco Music was named Music Week's Record Label of the Year and is home to internationally successful artists who have sold more than 380 million records to date. Syco is the record label home to Labrinth, James Arthur, Camila Cabello, Louis Tomlinson, CNCO, Grace VanderWaal, Susan Boyle, and PRETTYMUCH amongst others. Syco's television assets include the global franchises The X Factor and Got Talent. Around the world, The X Factor airs in 168 countries and is watched by more than a half billion people. Artists discovered by the format have sold more than 300 million records worldwide, including 200 number ones and 380 top 10 records. The Got Talent format officially holds the Guinness Book of World Records title for highest number of adaptations, making it the "World's Most Successful Reality TV Format," and has been aired in 194 territories worldwide. America's Got Talent has been the #1 US summer reality series for the past decade. Syco Film produced the 2013 #1 global box office hit "One Direction: This Is Us," a 3D concert movie with Sony Pictures and have partnered with Animal Logic (The Lego Movie, Happy Feet) to produce a number of music-based live action-hybrid animated movies.

ABOUT FREMANTLE
Fremantle is one of the largest and most successful creators, producers and distributors of scripted and unscripted content in the world. A global entertainment powerhouse, Fremantle has an outstanding international network of production teams, companies, and labels in over 30 countries. Fremantle produces in excess of 12,000 hours of original programming, roll out more than 70 formats and air 400 programs a year worldwide. The group distributes over 20,000 hours of content in more than 200 territories. Fremantle is also a world leader in digital and branded entertainment, with more than 370 million subscribers across 1,500 social channels and over 100 billion views across all platforms. Fremantle is part of RTL Group, a global leader across broadcast, content, and digital, itself a division of the international media giant Bertelsmann.

For more information, visit www.fremantle.com, follow us @FremantleUS or visit our Facebook and Linkedin pages.
Posted by Danielle at 3:33 PM