The filming of brand new Swedish Netflix Original Love & Anarchy has started in Stockholm, Sweden and the cast includes Ida Engvoll, Reine Brynolfsson, Björn Kjellman, Johannes Bah Kuhnke, Gizem Erdogan and Björn Mosten, who makes his acting debut. The series is created by acclaimed screenwriter and director Lisa Langseth, and produced by FLX, the production company behind Quicksand. Love & Anarchy will launch exclusively on Netflix in 2020. 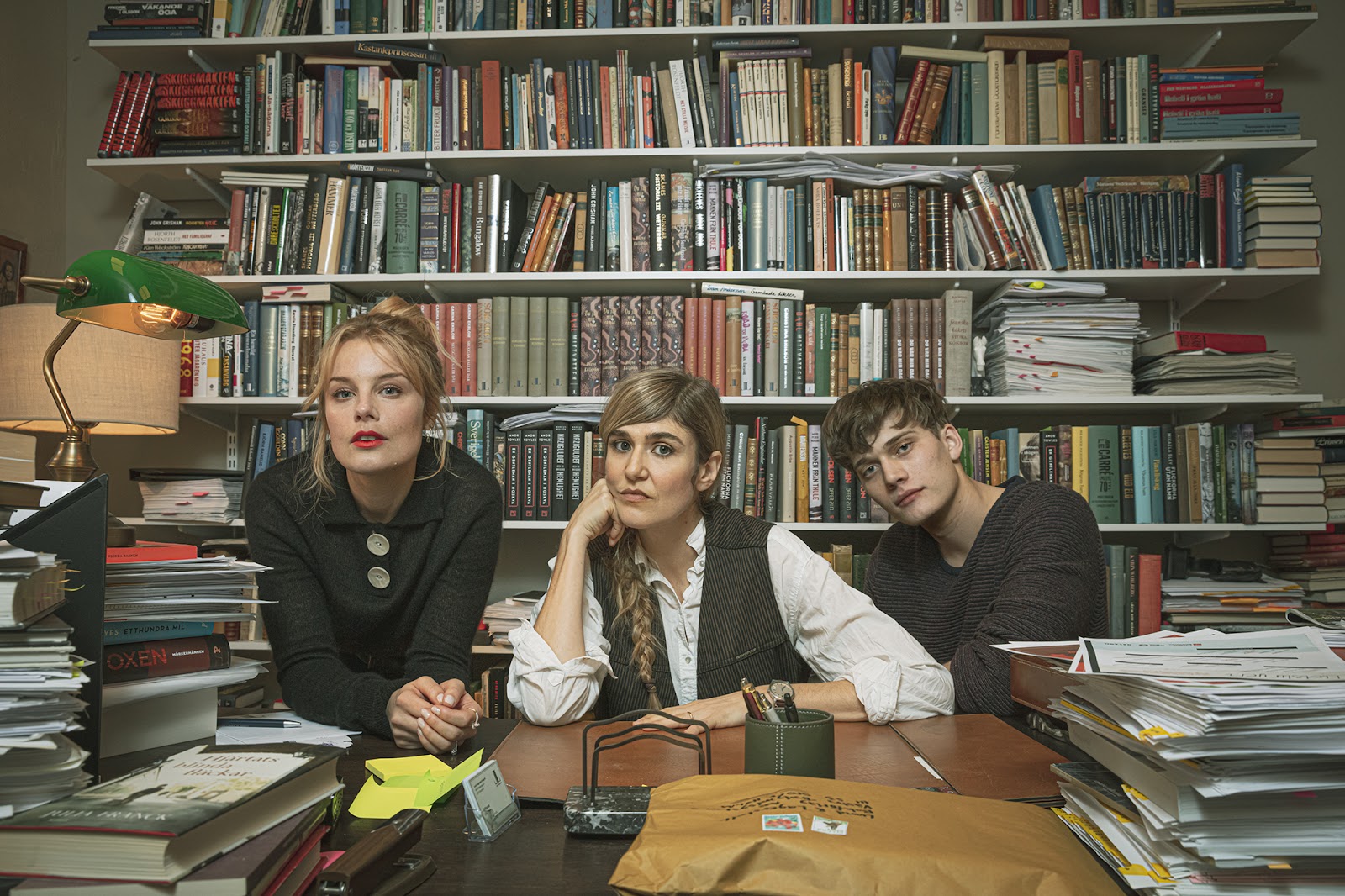 Ida Engvoll as Sofie and Björn Mosten as Max together with Lisa Langseth
Credits: Ulrika Malm / NetflixThe eight part series features Sofie (Ida Engvoll), a career driven consultant and married mother of two. When Sofie gets an assignment to modernize an old publishing house she meets young IT tech Max (Björn Mosten), and an unexpected flirtatious game begins. Sofie and Max secretly challenge each other to do things that question societal norms. It starts innocently enough, but as the game gets more and more daring the consequences grow beyond proportions.
I hope Love & Anarchy becomes cheeky, funny and will give a new perspective on our society. To me, the story is a paradox taking place within and around my character Sofie in a society that isn’t fully embracing the human being. It will be an interesting and challenging journey for me in terms of class, psyche and body - and I am very much looking forward to jumping on it together with Lisa Langseth, FLX and Netflix. Love is one of my greatest interests and combined with anarchy this is my dream role! says Ida Engvoll.
Love & Anarchy is created by Lisa Langseth with feature films like Euphoria, Hotell and Pure on her resumé. Langseth also serves as the head writer together with Alex Haridi (Quicksand, Blue Eyes, Real Humans) and is directing all episodes. The series will be produced by FLX and the team behind Quicksand; producers Fatima Varhos (Quicksand, Blinded) and Frida Asp (Quicksand, The Bonus family) together with the executive producers Pontus Edgren (100 year old man, Sunny Side) and Martina Håkansson (Happy at Sea, Blinded).
The cast  also includes: Lars Väringer, Elsa Ageman Reiland, Bejamin Shaps, Malin Levanon, Fredrik Hammar, Ejke Blomberg, Carla Sehn and Ruben Lopez.
Main cast
Sofie  – Ida Engvoll
Ida Engvoll has played multiple roles in television series and films such as the title role in Rebecka Martinsson: Arctic Murders, The Restaurant, The Bridge and A man Called Ove. In addition to acting for television, she has also performed on Stockholm city theater and the national stage, The Royal Dramatic Theatre.
Max – Björn Mosten
Love & Anarchy is Björn Mosten’s acting debut. Besides acting he’s studying the Master's Programme in Computer and Information Engineering at Uppsala University.
Johan  – Johannes Bah Kuhnke
Johannes Bah Kuhnke has acted in several films and received international attention in 2014 for his role in the film Force Majeure. In 2020 he was nominated for Best Actor in a Leading Role for his performance in Jag kommer hem igen till jul. In addition to acting in films and on television, he has performed in plays such as Cabaret and The Jungle Book. Bah Kuhnke also features in Danish Netflix original The Rain.
Ronny  – Björn Kjellman
Kjellman has a degree from the Theater Academy in Malmö and made his stage debut in 1986 at the Stockholm City Theater in the play ‘Affären Danton’. He has played several lead roles in popular Swedish films, such as Adam & Eva, Vägen ut (for which he was awarded a Swedish Academy Award, the Guldbaggen) and Klassfesten.
Friedrich – Reine Brynolfsson
Reine Brynolfsson is one of the most experienced and beloved actors at The Royal Dramatic Theatre. He had his big break on the big screen in 1990 through Colin Nutley’s feature film Black Jack. He is also known for films like House of Angels (1992), Jerusalem (1996), Les Misérables (1998) and Ravens (2017).
Denise - Gizem Erdogan
Gizem Erdogan has a background from both theater, film and television. She was nominated in the category ‘Best female supporting role’ for Dröm Vidare and recently praised for her performance in the tv drama Caliphate. Next she will play the lead role in the SVT drama ‘The Thin Blue Line’.
About FLX:
FLX is one of Scandinavia’s fastest growing production companies in TV drama, feature films and commercials. Drama series released in 2019 include “Quicksand”, the first Swedish original series for Netflix, finance thriller “Blinded”, “Bonus Family season 3”, “The Simple Heist season 2”, and “Sunny Side season 6”.  Releases in 2020 include the features “Jönssonligan” directed by Tomas Alfredson, 'Day by day’ directed by Felix Herngren, ’Bert’s diary, directed by Michael Lindgren and Netflix Original series ’Anxious People’. FLX is owned by SF studios, Felix Herngren and Pontus Edgren.
About Netflix:
Netflix is the world's leading streaming entertainment service with over 167 million paid memberships in over 190 countries enjoying TV series, documentaries and feature films across a wide variety of genres and languages. Members can watch as much as they want, anytime, anywhere, on any internet-connected screen. Members can play, pause and resume watching, all without adverts or commitments.
Posted by Danielle at 2:58 PM