-----Tom and Jerry have chased their way over funny bones and into hearts for generations, and the iconic team's earliest adventures are unleashed inside this delightful 2-Disc Collection of 37 Remastered and Uncut Shorts Plus Fun Bonus Features. Created by William Hanna and Joseph Barbera, the beloved cat and mouse came out of the gate as instant cartoon stars whose hilariously diabolical rivalry delighted everyone. Among these golden nuggets are seven Academy Award nominees and four winners. And with this in hand, you're a winner too!
NOTE: this is an MOD re-release of an item released to stores in 2011. To our knowledge, the content on these discs will be identical to the previous release. 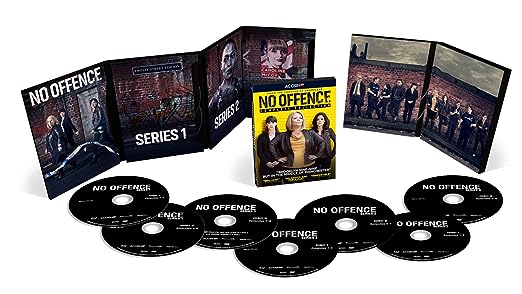 -----From legendary writer Paul Abbott (Shameless, State of Play) comes this award-winning British detective drama with a raucous and razor-sharp take on modern policing. Outspoken DI Vivienne Deering (Joanna Scanlan, Notes on a Scandal) leads an ace but unorthodox squad that tackles Manchester's most dangerous crimes, from serial killers to drug dealers and bombings to gang warfare. Keeping these mean streets clean is a daunting task for the close-knit team at the Friday Street Station, which includes loyal and impulsive DC Dinah Kowalska (Elaine Cassidy, The Paradise), anxious but brilliant DS Joy Freers (Alexandra Roach, Anna Karenina), and brash charmer DC Spike Tanner (Will Mellor, Broadchurch). With its fierce female characters, irreverent humor, and shocking plot twists, No Offence is "shaking up the police drama" (The Independent, UK) in this complete collection of all three seasons. 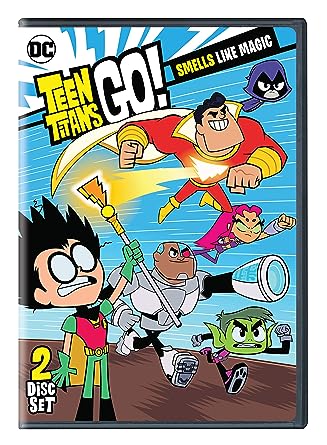 -----Robin, Starfire, Cyborg, Beast Boy and Raven continue the fun in season five of TEEN TITANS GO! with all-new comedic adventures, giving viewers a look at what life is really like as a teen super hero...once the cape comes off. This character-driven comedy - based upon DC characters - focuses on the funny that happens in between saving the world and living together as teenagers without adult supervision. With epic staring contests to decide who does the laundry, a series of quests and battles to construct the perfect sandwich, or fighting crime in Jump City, one thing is for sure: these Titans are always ready for an adventure, inside the house and out.
.
COMING ON 3/24:
* The UnXplained - Season 1 (Lionsgate)
$14.98 SRP DVD
-----Hosted and executive produced by Golden Globe- and Emmy Award-winning actor, William Shatner, this hit series from HISTORY tackles subjects that have mystified mankind for centuries: from Japan's ominous "Suicide Forest" to strange creatures like the Chupacabra to bizarre Voodoo rituals. With compelling contributions from scientists, historians, and first-hand witnesses, each episode seeks to shed light on how the seemingly impossible can happen, providing answers for some while leaving others...UnXplained. From the producers of "Ancient Aliens," "Lost In Space," and "The Curse of Oak Island."
.
COMING ON 3/31:
* Transformers - The Complete Original Series (Shout!)
$69.97 SRP DVD

EXTRAS: Retrospective Featurettes; From The Files Of Teletraan-2; PSAs; Toy Commercials; Art Galleries
-----'TIL ALL ARE ONE! Four million years after crash-landing on an unfamiliar planet, sentient robots with the ability to disguise themselves as common vehicles awaken on present-day Earth. Engaged in a crucial race to find a new energy source for their home planet of Cybertron, Optimus Prime and the heroic Autobots must defend the innocent people of Earth against their archnemeses: Megatron and the power-hungry Decepticons! All 98 Episodes From The Animated Series.
NOTE: this appears to be an indentical re-release of the 15-DVD set Shout! Factory previously released in 2011.

-----On this season of ANCIENT ALIENS, ancient astronaut theorists continue to explore evidence of extraterrestrial contact around the world. From enormous geoglyphs on both the Earth and Mars to strange 17,000-year-old-statues in Africa to remote viewing operations targeting UFOs and other intriguing phenomena, these amazing discoveries shed new light on the theory that extraterrestrials not only visited humans in the distant past - but may still be present on Earth today. 12 episodes on 2 discs.
.
COMING ON 3/31:
* SpongeBob SquarePants - The Complete 11th Season (Nickelodeon/ViacomCBS)
$22.98 SRP DVD

-----The complete eleventh season of SpongeBob SquarePants is resurfacing, and it's bringing some of the most unforgettable characters in Bikini Bottom with it! Dive headfirst into 50 deep-sea tales of nautical nonsense! Enter DoodleBob's alternate dimension and take a trip to Bubble Buddy's hometown. Help SpongeBob keep Fred's leg out of harm's way, move Bubble Bass out of his mom's basement, and stop SpongeGar from wreaking havoc all over town! Make new friends, including an imaginary hamster, a sea bunny, the Krusty Krab's peculiar night crew and Sandy's nutty nieces. Plus, take a trip to the moon, solve the curious case of the missing clarinet and hear Gary speak for the very first time ever! 3-disc set.

-----In Series 21, Barnaby and Winter investigate the killings of a ballroom dancer and real estate agent, attacks in a village, and a clash between fishermen and mud runners. The cozy villages of Midsomer County reveal their most sinister secrets in these contemporary British television mysteries inspired by the novels of Caroline Graham, modern master of the English village mystery. Detective Chief Inspector Tom Barnaby (John Nettles, Bergerac) has policed the murderous county for decades, and now he's ready to retire. In these four episodes, Barnaby investigates his final cases before leaving the denizens of Midsomer in the capable hands of his cousin, DCI John Barnaby (Neil Dudgeon, Life of Riley). Also starring Jason Hughes as Detective Sergeant Ben Jones.

EXTRAS: Includes an all-new special feature:Where Does It End? --Executive producer and co-creator, Sarah Treem reflects on how the show and the characters evolved from their introduction through the emotional ripples created by the initial affair.
-----In the aftermath of horrific events, Noah (Golden Globe nominated Dominic West) and Helen (Golden Globe winner Maura Tierney) try to come to terms with the consequences of their choices. Just when things seem to have stabilized, a chance encounter with someone from the distant past sets in motion a sequence of events that brings them both to their knees. They realize they must face their past in order to truly move on. And some years in the future, Alison and Cole?s now adult daughter Joanie (Academy Award winner Anna Paquin) attempts to piece together the truth about what happened to her mother, bringing the final season of the critically acclaimed series full circle.
* The Affair - The Complete Series (ViacomCBS)
$69.98 SRP DVD

EXTRAS: Nearly 3 hours of special features, including featurettes, character profiles, and much more!
-----Broken hearts. Broken lives. Life leads us into temptation as The Affair invites us into the worlds of two families brought together and torn apart by betrayal. The Golden Globe winner for Best Television Series ? Drama examines both sides of an illicit romance begun by happily married father Noah Solloway (Golden Globe Nominee Dominic West) and married waitress Alison Lockhart (Golden Globe Winner Ruth Wilson). The effects of their liaison reverberate through every corner of their lives, beginning with their respective spouses, Helen (Golden Globe Winner Maura Tierney) and Cole (Joshua Jackson). But betrayal is not the darkest secret that emerges as an ongoing murder investigation raises more questions and overturns more relationships. No one escapes the consequences as lust, love, grief and guilt continue to clash over five provocative seasons. Guest star appearances from Brendan Frasier, Jennifer Jason Leigh, Tim Matheson, and many more.
.
COMING ON 3/24:
* Treadstone - Season 1 (Universal)
$39.98 SRP DVD

-----From a producer of the Bourne franchise, Treadstone is an action-packed thriller set amidst the CIA black ops program Operation: Treadstone. Exploring both the origin of the infamous covert program, as well as connecting to present-day special ops, Treadstone follows the action across the globe - from D.C. to Berlin to Paris and beyond. Using a mysterious behavior-modification protocol, Treadstone turns its recruits around the world into nearly-superhuman assassins, following sleeper agents as they're mysteriously "awakened" to resume their dangerous missions.
.
COMING ON 3/31:
* Mr. Robot - Season_4.0: The Final Season (Universal)
$39.98 SRP DVD; $44.98 SRP Blu-ray 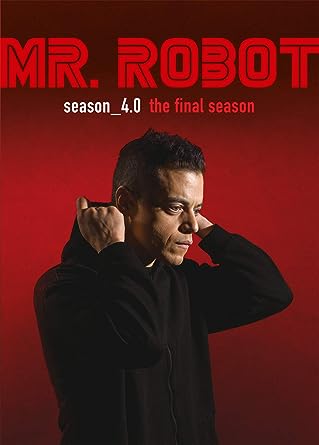 EXTRAS: Deleted Scenes, Gag Reel
-----Mr. Robot follows Elliot Alderson (Rami Malek), a cybersecurity engineer who, along with Mr. Robot (Christian Slater) and fsociety, starts a revolution to change the world. Season 4 will pick up where the third season finale left off, delving into the pros and cons of Elliot hitting "send" on the email that could reverse Five/Nine.
* Mr. Robot - The Complete Series (Universal)
$79.98 SRP DVD; $99.98 SRP Blu-ray 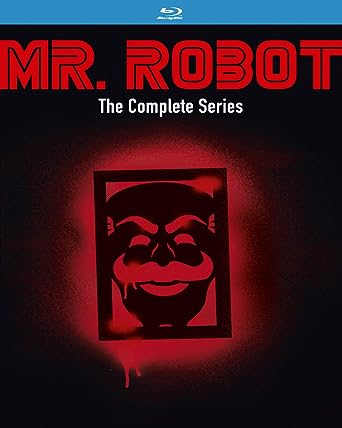 -----Based on the hit movie franchise, The Purge revolves around a 12-hour period when all crime, including murder, is legal. Season Two explores how a single Purge Night affects the lives of four interconnected characters over the course of the ensuing year, all inevitably leading up to the next Purge. From Blumhouse Television and UCP, the second season of the anthology series opens on Purge Night but dives deeper than ever before into what the Purge world looks like the other 364 days of the year.

-----A young woman returns to her hometown to help save her sister's failing inn, where she contends with memories and faces from her past. Jesse Metcalfe, Meghan Ory, Barbara Niven, Treat Williams. 2-disc set.
.
COMING ON 3/17/2020:
* Crashing - The Complete 3rd Season (HBO)
$29.98 SRP DVD; $39.98 SRP Blu-ray
-----Fresh off of his two-month college comedy tour, Pete returns to New York City with newfound confidence in his comedic abilities. While growing more assured, he continues to struggle over what he really wants out of comedy and how to find a happy balance between his old, faith-based self and the new, more ambitious comic he's becoming.

-----From celebrated author Janette Oke (the Love Comes Softly series) comes a rigorous and romantic adventure as epic as the wide frontier. Erin Krakow (Army Wives), Jack Wagner (Melrose Place) and Pascale Hutton (Flashpoint) star in When Calls The Heart, a beautiful story filled with "many of the values we all hold precious such as love, family, friendship, community, faith and caring about one another" (Military Press)! It's Christmas time once again in Hope Valley, and Lucas has taken it upon himself to host a spectacular holiday festival for the town. Meanwhile, Nathan receives a tempting job offer that would take him and Allie away from the community they've grown to love, while Elizabeth faces the challenge of finding a Christmas tradition that will create lasting memories for Little Jack. And of course, all of Hope Valley comes together for a moving celebration of Christmas Eve, filled with fellowship and heart.

EXTRAS: An All-New Special Feature from the Series' Thrilling Second Season!
-----In season two, following the aftermath of their encounter with Trigon, Dick Grayson reforms the Titans. Under his supervision in their new home at Titans Tower, Rachel aka Raven, Gar aka Beast Boy and Jason Todd aka Robin train together as a team. They are joined by Hank Hall and Dawn Granger aka Hawk and Dove, and Donna Troy aka Wonder Girl. Although these original Titans attempt to transition into a regular life, when old enemies resurface everyone must come together to take care of unfinished business. And as this family of old and new Titans - including Conner Kent and Rose Wilson - learn to co-exist, the arrival of Deathstroke brings to light the sins of the old Titans, which threaten to tear this new Titans family apart once more.