EXTRAS: Commentary Tracks, Gag Reel, Interview, Featurette, Casting Tests, and much more!
-----Join Detective Frank Drebin (Leslie Nielsen) and Capt. Ed Hocken (Alan North) as they solve the toughest cases - full of all the sight-gags, puns, and non-sequiturs that made the series famous! Created by David Zucker, Jerry Zucker and Jim Abrahams, who gave us other classics such as Airplane! And The Naked Gun series.
NOTE: this Blu-ray title was previously released in DVD format in 2006
.
COMING ON 4/21:
* Infinity Train - Book 1 (Warner)
$14.97 SRP DVD
EXTRAS: Animatics; Infinity Train Gallery; Commentary; The Mix of the Final Episode; The Train Documentaries
-----Join Tulip on a mind-bending journey aboard the mysterious Infinity Train, alongside her companions Atticus, the canine king of Corginia, and One-One, a robot with dueling personalities. With puzzles and perils awaiting them in every car, and the relentless Steward on their trail, will Tulip ever find a way off the train and return home? Created by Owen Dennis, former writer and storyboard artist from Regular Show.
.
COMING ON 4/28:
* Arrow - The 8th And Final Season (Warner)
$24.98 SRP DVD; $29.98 SRP Blu-ray
EXTRAS: The Best of DC TV's Comic-Con Panels San Diego 2019; Arrow: Hitting the Bullseye (Finale Night Special); Deleted Scenes; BLU-RAY EXCLUSIVES: Digital Copy; All Five Epic Episodes of the DC Crossover Event "Crisis on Infinite Earths" from Supergirl, Batwoman, The Flash, Arrow and DC's Legends of Tomorrow; BONUS DISC with Crisis Past and Present: Kevin Conroy Bat Legend; Crisis on Infinite Earths: The Architects Return; Crisis Past and Present - Superman vs. Superman; Characters in Crisis: Pariah; Crisis Management; Character in Crisis: The Anti-Monitor
-----Following the arrival of The Monitor, Oliver Queen left his home, his family, & his team behind to take on his most challenging battle yet, knowing the cost may be his life. But this time it's not just his city he's seeking to protect: it's the entire multiverse! Oliver's quest will send him on a journey where he is forced to confront the ultimate question: what is the true cost of being a hero?
* Arrow - The Complete Series (Warner)
$169.99 SRP DVD; $189.99 SRP Blu-ray
EXTRAS: bonus material from the previous season sets are included, and the bonus disc included with "The 8th And Final Season" Blu-ray version is also included with the Blu-ray release of "The Complete Series."
-----After eight remarkable seasons, Warner Bros. Home Entertainment and DC mark the end of an epic era. Get ready for nonstop action from start to finish! 38-disc DVD set; 31-disc Blu-ray set.

-----Suave, smart, and somewhat strange, Raphael Balthazar (Tomer Sisley) can make the dead speak like no one else. As a forensic pathologist in Paris, he works with no-nonsense chief inspector Helene Bach (Helene de Fougerolles) to solve the city's most disturbing crimes. But there's one case that continues to haunt him...the murder of his wife over a decade ago. 2 discs. 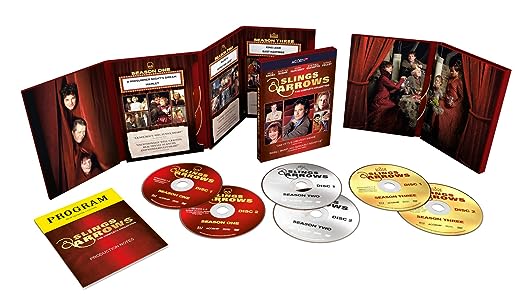 -----Paul Gross (Due South) stars as Geoffrey Tennant, the passionate but unstable artistic director of the New Burbage Theatre Festival. Haunted by the ghost of his predecessor (Stephen Ouimette), he struggles to realize his creative vision while handling touchy actors, a jittery general manager (Mark McKinney), a pretentious guest director (Don McKellar) and his own tempestuous romance with the festival's leading lady (Martha Burns). The backstage bedlam mirrors the onstage angst as Geoffrey directs three of Shakespeare's masterpieces -- Hamlet, Macbeth and King Lear -- one in each season. Guest stars include Rachel McAdams (Wedding Crashers), Colm Feore (Chicago), Sarah Polley (Go, The Sweet Hereafter), and renowned Stratford Festival actor William Hutt in one of his last performances.
NOTE: this is a re-release of a title Acorn previously released on DVD in 2008
.
COMING ON 4/14:
* The Heart Guy - Series 4 (RLJ/Acorn)
$59.99 SRP DVD 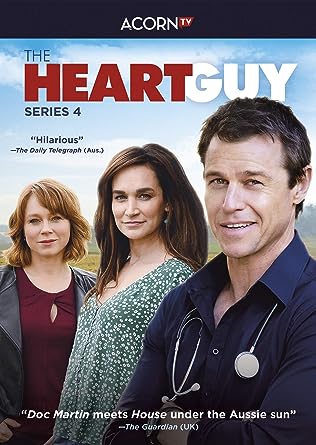 -----As the hit Australian dramedy returns, charming but egotistical heart surgeon Hugh Knight (Rodger Corser, Glitch, Rush) is flying high. After completing his probation, he has decided to stay in his rural hometown to raise his one-year-old daughter, Eliza, and the clinic he built with hospital head Penny (Hayley McElhinney, The Babadook) is about to partner with a wealthy sponsor. But the arrival of a beautiful, party-loving doctor threatens to tempt Hugh back into his old ways. On the home front, Hugh's brother, Matt (Ryan Johnson, Fairly Legal), is happily living with his girlfriend (Miranda Tapsell, Newton's Law), but things get awkward when his estranged wife (Nicole da Silva, Wentworth) returns to town-especially with his overbearing mother (Tina Bursill, Home and Away) trying to reunite the couple. As Hugh contends with the pressures of his job, his family, and his love life, will he be able to shape up and be the father Eliza needs?

* Ultraman X - The Series & The Movie Combo Pack (Mill Creek)
$39.98 SRP Blu-ray
EXTRAS: Includes 8-Page Episode Guide; Digital Copy (redeem on MCE's new "movieSPREE!" service)
-----As Ultra Flares from the sun blanket the Earth, Spark Dolls that had been hidden underground and in the sea are turned into monsters. In order to deal with the sudden outbreak of invading aliens, humanity arms itself with machines of super science and forms the defensive team Xio. 15 years later... A member of Xio, OozoraDaichi, hears a mysterious voice while in combat against a monster. "Unite..." Just as Daichi is on the verge of being obliterated by the creature, he finds himself bathed in a radiant light.
NOTE: Japanese with English subtitles

EXTRAS: Includes special features from prior seasons: featurettes, photo gallery, launch promos, deleted & extended scenes on select episodes, sample episodes from other hit series ("The Good Fight" initial episode and "Bull" initial episode)!
-----WORLD-CLASS LEADER. With Dr. Elizabeth McCord (Téa Leoni), life is never politics as usual. As an ex-CIA analyst and political science professor turned Secretary of State, Madam Secretary handles international incidents and domestic challenges with confidence and composure. Her loving husband, CIA Agent Henry (Tim Daly), is her ideal partner, helping her weather both political storms and battles with parenthood. While acting as a steadfast advisor to President Conrad Dalton (Keith Carradine), McCord negotiates foreign affairs as readily as she navigates life with two teenagers. Along the way, she clashes and collaborates with White House personnel, including Chief of Staff Russell Jackson (Željko Ivanek), State Department insider Nadine Tolliver (Bebe Neuwirth) and Tolliver's successor, political strategist Kat Sandoval (Sara Ramirez). Dedicated to her country, her achievements culminate in her own run-up to the presidency. In all six seasons of this gripping drama, Madam Secretary is a force to be reckoned with.
.
COMING ON 4/28:
* Underdog - The Complete Collector's Edition (Shout! Factory)
$49.97 SRP DVD

EXTRAS: Bonus Cartoons: Tooter Turtle And The Hunter; Featurette: "There's No Need To Fear...Underdog Is Here"; Interview With Underdog Co-Creator Joe Harris, Who Explains And Narrates A Never-Before-Seen Storyboard; Commentaries With Writer/Producer/Co-creator W. Watts Biggers, Voice Actor George S. Irving, Producer Treadwell Covington, And Animation Historian Mark Arnold
-----"There's No Need To Fear...The Complete Underdog Collection Is Here!" When the city is in trouble, humble and lovable Shoeshine Boy turns into his alter ego Underdog to stop a series of villains, including the evil Simon Bar Sinister and Riff Raff. And when TV reporter Sweet Polly Purebred finds herself in danger, no one but Underdog can save the day! Now you can enjoy the 1960s cartoon canine superhero in this complete collection that includes all three seasons of the classic series. Each of the nine discs features Underdog's greatest adventures, along with all of the original shorts from Go Go Gophers, Klondike Kat, and Commander McBragg. Get ready for hours of heroic fun!
NOTE: this item was originally released in 2012, but went out of print. Now the same studio, Shout! Factory, is re-releasing the 9-DVD set at a lower list price.